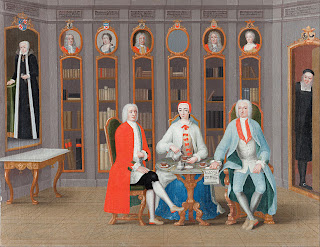 Carl Fredrik Svan, The Stenbock Family in their Library at Ranas, circa 1740

I finished reading The Future by Al Gore.  It is a solid reminder that we are at least partially responsible for understanding our future.  The book both gives hope and at the same time is a bit scary.  There is a nice balance of warnings and admonitions about the future.  I also cracked open On the Map by Simon Garfield on the way to work.

The two sets of nesting display tables are now in the new books area.  They should provide an improvement for how books are displayed.  I rather like them.

I checked the displays and the gifts this morning.  I also checked the Twitter and Facebook for the library.  I also spent some time working on ordering.

I checked out the book Microsoft Sharepoint 2010 for Dummies by Vanessa L. Williams.

If you like comics, the Society of Illustrators and the Museum of Comic and Cartoon Art are having the MOCCA Art Festival on April 6 and April 7, 2013.  It should be very entertaining.

I am thinking about the Professional day at New York Comic Con.  It has not been announced yet.

I spent some time reading the Times Literary Supplement which is British.  Sometimes there are titles which are interesting like The City of Akhenaten and Nefertiti Amarna and Its People by Barry Kemp.

I also spent a little more time going through gift books.  There was a nice copy of East of Eden by John Steinbeck and a few African American titles by Omar Tyree and Eric Jerome Dickey.

I enjoyed reading On The Map on the way home.  It starts out with the Great Library of Alexandria and how it established the beginnings of cartography.  So far, there is a strong historical perspectives with a focus on famous objects like the Mappa Mundi and people like Marco Polo.  The writing is both entertaining and informative.

An Oddly Modern Antiquarian Bookstore
http://tmagazine.blogs.nytimes.com/2013/03/07/an-oddly-modern-antiquarian-bookshop/
Posted by Book Calendar at 8:37 AM