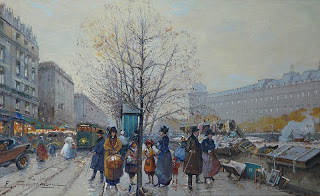 I read a novella last night called The Discovery of America by the Turks by Jorge Amado.  The book has an introduction by Jose Saramago.  It is a rather ribald story about a family trying to marry off its prudish daughter.  The setting is the cacao fields in the Brazilian frontier of 1903 focusing on Arabic immigrants. At the time many of the Arabs had Ottoman passports to Brazil and were called Turks.  The story has some strong language, sex, and a bit of chicanery in it.  This is the first english translation of this work.  I liked the book, Dona Flor and Her Two Husbands by Jorge Amado as well.

I read some more in Microsoft Sharepoint 2010 for Dummies.  I also checked the Facebook and Twitter for the library.  I spent a little time checking the displays.

We had an informal get together this morning for the staff with coffee and cake.  It was a pleasant experience.  The coffee was good.

We have a new bookshelf for the advanced reading copies in the staff room.

Right now, we are adjusting the Bookletters page for new fiction and nonfiction.

I am looking at a book called Kingston Noir.  It is a short story collection of mystery stories published by Akashic books.  There is also Brooklyn Noir, Venice Noir, Phoenix Noir, Toronto Noir, Manhattan Noir, Havana Noir, Mexico City Noir, Istanbul Noir, and a number of other cities in the series.

I finished reading Microsoft Sharepoint 2010 for Dummies today.   There was a bit about metadata, setting up search engines in Sharepoint, and web parts.  The book gave me a better sense of how enterprise content management systems work.

I also read a bit of Kingston Noir on the way home.  I rather like the stories because of the Jamaican perspective.

How to Become a 21st Century Librarian
http://lj.libraryjournal.com/2013/03/careers/how-to-become-a-21st-century-librarian/

Struggling to Satisfy Demand The Reality of the Public Library Ebook Marketplace Reflected in Usage Data from a Selection of Public Libraries
http://libraryrenewal.org/2013/03/18/struggling-to-satisfy-demand/
Posted by Book Calendar at 8:54 AM