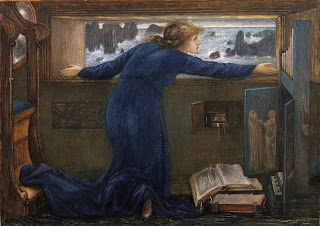 Goauche of Dorigen of Bretagne longing for the safe return of her husband by Edward Burne-Jones, 1871. Victoria and Albert Museum, London http://commons.wikimedia.org/wiki/File:Burne-Jones_Dorigen_of_Bretagne_VA.jpg

I checked the library Twitter and Facebook this morning.  I also read some of On the Map on the way to work.  I like the discussions of imaginary places that appeared on maps.  For example, California was depicted as an island, there was a range of mountains called the Kong Mountains in Africa which did not exist, and a variety of islands in the Pacific which were not there.  This kind of information is entertaining to me.

I checked the displays and the gift books.  I also spent a little time discussing cataloging.  I am reading the latest issue of romance sells which is a listing of forthcoming books from Romance Writers of America.  The library has the Computer Lab for Academic Use today from 2:00 p.m. to 4:00 p.m.

I contacted my local official in support of libraries through the New York Library Association.
http://www.nyla.org/max/4DCGI/cms/review.html?Action=CMS_Document&DocID=58&MenuKey=advocacy

I read a little bit more of On the Map.  There were some literary and film refernces that touched my curiosity:  the maps in the film Casablanca and the treasury map in Treasure Island.  There was also a picture of the giant globe given to Winston Churchill.  This book is full of little interesting facts.