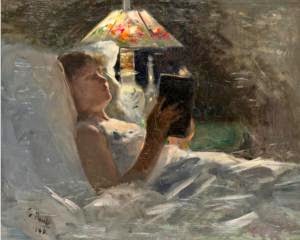 I checked the library Twitter and Facebook pages.  I also checked the new books, the displays, and the gift books.  I also spent some time looking at patron requests for films and books.

Three books came in for me to read, Karen Memory by Elizabeth Bear which is steampunk, The End of Power From Boardrooms to Battlefields And Churches To States, Why Being In Charge Isn't What It Used to Be By by Moises Naim which is the first book in the Facebook book club.  Also, the book, Trigger Warning Short Fictions and Disturbances by Neil Gaiman came in as well.

I have a box of Advanced Reading Copies which were sent to from Library Journal to read through.  I picked out The Water Knife by Paolo Bacigalupi which is a near future story.  It is hard science fiction set in a near future American Southwest.  Water has become a precious commodity as rivers have dried up.   The rich live in high rise arcologies while the poor try to flee north.  Texas has collapsed from drought.  The book is coming out in Spring 2015 with a 150,000 print run.

I spent a little time going through flyers and looking at programming this morning.

I spent a little time discussing standing orders with a colleague as well.

I read some more of Behind the Dream.  Clarence B. Jones describes how the Letter from a Birmingham Jail was smuggled out of Martin Luther King Jr.'s cell.

A Glimpse Inside the Hidden Vault Where Harvard Keeps Millions of Books
http://gizmodo.com/a-glimpse-inside-the-hidden-vault-where-harvard-keeps-m-1684024865