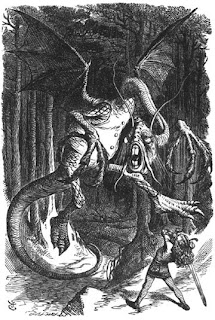 The Jabberwocky.
I have been in a snarky mood today. I think I could slay dragons.

Not everything you read is something that you want to review. Although, I read Howard Zinn, A People's History of American Empire on the train this morning and enjoyed it, I have decided against reviewing it. I am also not going to put an Amazon button to sell it.

There are pieces of it which I am not sure which I can give justice to. I think part of reviewing is making decisions about what you want to give an opinion on. There is a lot which is covered in the book that is not part of mainstream history. It is more a history written from a radical left viewpoint. Some of it is frankly quite uncomfortable. This is the type of book which speaks for itself when you read it. I don't agree with some of the things being said. I am going to include the Youtube clip on the book which is a very nice summary.

I have a few problems with the darlings of the left. Howard Zinn is a close friend of Noam Chomsky who writes anarchist criticism of American power. I think I have a different frame of reference than Howard Zinn, more business oriented, I am more interested in clean technology, direct or e-democracy, green capitalism, economic quality of life, and employee owned enterprises. I am not a fan of pure socialism. There are some sections in the book which say how wonderful Eugene Debs is as well as idolize the wobblies. While they are interesting, they don't seem to be a good direction for this country to go.

There has been a steady decline in readership of my blog lately. I am not sure what is happening. It would be nice to see some feedback on why. First my readership declined with the changes in Entrecard. Now, I am getting some steady readers, but not a large amount of them. I have tried a variety of different traffic generators, but this does not seem to help.

I am in a snarky mood today. A bit sharp and biting. So I will include an appropriate poem to signal my mood. I feel like I could slay dragons today. Maybe I should read some science fiction.

'Twas brillig, and the slithy toves
Did gyre and gimble in the wabe;
All mimsy were the borogoves,
And the mome raths outgrabe.

"Beware the Jabberwock, my son!
The jaws that bite, the claws that catch!
Beware the Jubjub bird, and shun
The frumious Bandersnatch!"

He took his vorpal sword in hand:
Long time the manxome foe he sought--
So rested he by the Tumtum tree,
And stood awhile in thought.

And, as in uffish thought he stood,
The Jabberwock, with eyes of flame,
Came whiffling through the tulgey wood,
And burbled as it came!

One two! One two!
And through and through
The vorpal blade went snicker-snack!
He left it dead, and with its head
He went galumphing back.

"And hast thou slain the Jabberwock?
Come to my arms, my beamish boy!
O frabjous day! Callooh! Callay!"
He chortled in his joy.

'Twas brillig, and the slithy toves
Did gyre and gimble in the wabe;
All mimsy were the borogoves,
And the mome raths outgrabe
Posted by Book Calendar at 6:21 AM

I am struggling to get more readership for my sci fi blog. Its scifijungle.com. Let me know if you would be interested into doing reciprocal links or anything like that. I see you do reviews on sci fi books quite often so we might share some readership.

Let me think about it. I do reviews on a lot of different science fiction books, as well as fantasy. Right now, I am reading a new short story collection by Paolo Bacigalupi which is rather interesting.

If you're feeling snarky and in the mood for Mimsy and SF, how 'bout Harlan Ellison's story "Mimsy Were The Borogroves"?

Sorry to read about your drop in readership, but I don't have any useful suggestions. I don't pay much attention to my stats.

Regarding your drop in readership, my suggestion (although as a disclaimer I do not always have mainstream tastes so would hate for you to try this and put effort into it an then have it fail) would be some sort of way that readers could share what they are reading. I know this has been a popular posting item on the Bookcrossing boards. Maybe there is a widget for that?