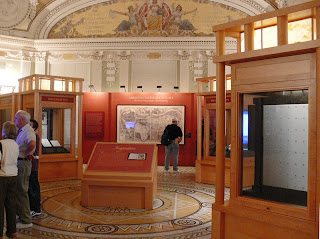 American Treasure Room, U.S. Library of Congress. I visited here when I was at library school. There is an original Gutenberg Bible under glass.

I decided I needed a break from nonfiction. On the train home last night, I read The Collected Works of Tony Millionaire's Sock Monkey, Volume Three and Four. It was lightweight and funny. Something which made me laugh and smile a bit. It didn't take me that long to finish. As usual Uncle Gabby the Sock Monkey, and Drinky Crow, the stuffed Crow were up to mischief. This time they were playing with a victorian hunters taxidermy exhibit with various stuffed critters deer, birds, and insects. Afterwards they went on a hunting exhibit with a butterfly net to collect some small lizards, beetles, and ladybugs.

After finishing Sock Monkey, I started on a new collection of science fiction short stories, Pump Six and Other Stories by Paolo Bacigalupi. The writing is quite interesting. It is focused on the environment and biology. The characters come from a variety of different walks of life. For example in the short story, The Fluted Girl, it seems to be set somewhere in Eastern Europe. A girl and her sister have been transformed into living instruments with fragile hollow bones by their owner. It is a tragic story. It is also one of the free sample stories avaialable on Paolo Bacigalupi's web site. http://windupstories.com/pumpsix/the-fluted-girl/ . There is some mature content in this story. It looks like quite an interesting site.

I plan on reading some more of the short stories on the train. I work late tonight, so I am off this morning. It is rather odd, having to work very late one night, then very early the next day. I really should not complain. I have a job in an American economy that could possibly be heading south very soon.

Tomorrow, I go to a seminar on poverty alleviation. I wonder how libraries can alleviate poverty. My boss asked me to go. I hope, I at least get to keep a name tag as a memento. The next day after that is the New York Comic Con so I should have a very interesting week.

I was thinking about muckraking stories this morning. One problem I have with them is that they solve nothing. They just point out problems which are often obvious. You get to read how terrible things are. I am beginning sometimes it is more constructive to read about how to invest in renewable energy than to read about how terrible the oil, gas, and coal companies are. Companies are made of people. Some are terrible and some aren't. Muckraking in some cases seems to distract people from creating solutions.

I found an interesting article in Library Journal this morning. It is Venezuelan saber rattling against the U.S. Library of Congress. I found it to be profoundly entertaining in a way. I have actually been to the Library of Congress. You can't go inside the actual building if you are a visitor, but you can look down into the reading room from above.
http://www.libraryjournal.com/article/CA6551558.html
Here I am in the afternoon. Two books or should I say graphic novels came in for me. They are The Rabbi's Cat and The Rabbi's Cat 2. Dine-O-Meter Deb said she was reading The Rabbi's Cat as part of the Graphic Novel Challenge. I wanted to see what it was about so I requested it to be sent to my library.
I also took a minute to look through the New York Times Nonfiction Bestseller List and put Earth The Sequel: The Race to Reinvent Energy And Stop Global Warming by Fred Krupp who is the President of the Environmental Defense Fund.
I think right now, I have more than enough to read. Books are starting to pile up and I now have three small stacks of books to read.
Posted by Book Calendar at 3:25 AM