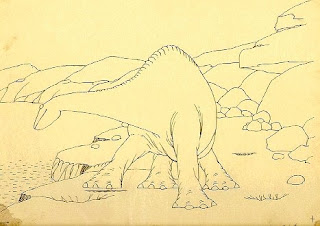 Next week is vacation time. I am still thinking a bit about the New York Comic Con yesterday. While I was there I signed up for the CBLDF, Comic Book Legal Defense Fund and paid my membership dues of $25. They had switched web providers earlier so I had trouble paying on line. I noticed that they had a membership table, a raffle table, and a special event that night with Neil Gaiman doing a fundraising dinner.

Anyways, I will be heading to work with my big bag of books in tow. I still have to do some minor things today to get ready for a program which will happen when I am away. There was a film program which I was supposed to do on Thursday while I was at the Poverty Workshop. Someone else did it. I also have arranged for a jazz lecturer to come in next week while I am out. This makes me a little bit nervous. I fret a bit about other people taking over things for me.

One of my colleagues showed me an article in the New York Times, Young, Hip and Wild About Comics, it is in the Metro Section, April 18, B2 Column 3. This is the link to the article online:
http://www.nytimes.com/2008/04/18/nyregion/18bigcity.html?em&ex=1208664000&en=be0ca07c60d27603&ei=5087%0A It says essentially what I saw at the New York Comic Con. A lot of young men and women in their twenties drawing art for publishers who are very interested in comics. The New York Comic Con is very different than most of the other comic conventions. Because it invites in professionals from the industry as well as librarians, comic book store owners, editors, and literary agents, you get a very different crowd than is at your usual comic book convention.

I took a look at the Weird Tales in its latest incarnation. The article, The 85 Weirdest Storytellers of the Last 85 Years. Most of the authors are people who I recognize. They recommended Virgil Finlay one of my favorite artists. Another of my favorite author pairs was mentioned, Henry Kuttner and C.L. Moore who worked as a husband and wife writing team. The article is well worth looking at if you want to see an interesting selection of unusual authors.
Weird Tales, March/April 2008 issue.

I took some time to look at the sites which were mentioned in the Online Journalism panel for comics on Friday. I rather like http://www.comicmix.com/ (Comic Mix) and http://pwbeat.publishersweekly.com/blog (The Beat), not because I know anything about the sites having seen for them about fifteen minutes so far today, but because they both have pictures of the New York Comic Con. The pictures are kind of fun to look at with people in goofy costumes, or just looking a bit eccentric.

This morning I had one of those moments when I was looking out the window staring off into the trees as the train rolled on. I really wasn't thinking of anything in particular. A thought rolled through my mind:

Hello. This post is likeable, and your blog is very interesting, congratulations :-). I will add in my blogroll =). If possible gives a last there on my blog, it is about the TV de Plasma, I hope you enjoy. The address is http://tv-de-plasma.blogspot.com. A hug.

Have a hug yourself. Unfortunately, plasma tvs are mostly out of my price range. Good luck.