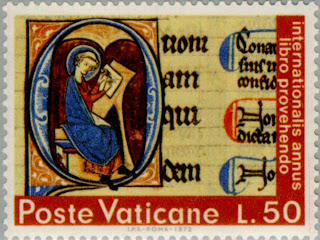 International Year of the Book, Postage Stamp 1972, The Vatican. I just found the image interesting.

I removed the symbol for The Society of Midnight Wanderers. They are going into hiatus and coming out with a new design. I look forward to seeing something new and interesting in the future from them. I have always liked some of the blogs on Society of Midnight Wanderers. I especially like The Uneasy Supplicant among the blog membership. http://uneasysupplicant.wordpress.com/

This morning was a much easier day. Last night, I forget my pen on the subway and ended up finishing reading Too Many Curses instead of taking notes and doing writing exercises. I enjoyed it anyways. Having more than one option to do at a time is a way to avoid wasting time. Time is not something which ever comes back to you in life. Money can be earned, but time flies away.

Sometimes, I think of my muse. I think of it not as a female muse, but as "Mr. Muse" a kind of shadow that follows me in my writing. I am beginning to think of him as an undefined character, a kind of everyman. It is a way to envision my voice in writing.

David Henderson is sending me an Advanced Reading Copy of his book, The Media Savvy Leader. It sounds kind of interesting. He has a website here. http://www.davidhenderson.com/ . He found me on Twitter.

I did more everyday things today, ordering lots of annual reports, starting on ordering industrial books, filing looseleafs, and general reference duties. I also redid the central display as a current events display. I am thinking of doing a display on the financial crisis in the United States. It might take me a couple days to do it properly. Later this afternoon, I get to do some more weeding of the collection. It is another day, another dollar. I also have to order a bunch of missing Job Information Center titles as well.
Today is wrapping up nicely. I am going to the New York Anime festival tomorrow. It will be a welcome break from the routine of the library. I will get to walk around and look at anime and manga. I hope they have martial arts films as well. I think it will be a lot of fun. The writer of Vampire Hunter D is doing a panel in the evening.
Posted by Book Calendar at 12:09 PM

Thank you my friend for the kind words. I hope to continue to live up to your expectations.

The new MW blog is coming along great. It has a new name, a new look and a new direction. More along the lines of a publishing house. But, don't tell anyone I said that :-)
I, with the help of Mike, should have it up and running soon. I'll send you an email when we are ready.

A display on fear might be appropriate for the financial woes currently being experienced. Perhaps some Stephen King or Edgar Allen Poe, "WallStreet the Tell Tale Heart".

What is happening on wall street and the housing market is more horrific than Poe or King right now. It is not fantastic. I really think a nice little display might be the right idea.