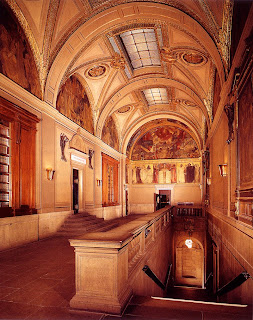 John Singer Sargent Boston Public Library (1895). I am not sure why I chose this image, it just stuck.

Yesterday, I spent some time at the laundromat doing writing exercises. What does fear mean? Risk mean? Chance mean? Change mean? from the book Writing Begins With the Breath. I wonder what it will be like attempting to do writing exercises on the subway.

I noticed that my review of Rebel Visions has been circulating among blogs, unfortunately, it has been attached to another group I belong to, Society of Midnight Wanderers, not my blog Book Calendar. I am wondering what it will mean. It is a rather interesting mix up. I kind of like it in a way. It seems like serendipity.

I am going to visit the Museum of Comic and Cartoon Art in Manhattan, New York today. I intend to buy a membership so I can sort through their library and find some interesting things for our library to purchase. I will be a cartooning scholar. :)

I got on the train to the museum and found out that one of my neighbors works for http://www.royalflushmagazine.com/ Royal Flush Magazine. It looks like a cross between an indie rock and roll magazine and Mad magazine or Cracked. The style is very interesteing. It clearly seems to draw a little bit from Ed Roth.

I also did some writing exercises on the train from Writing Begins With The Breath Embodying Your Authentic Voice. I wrote two short poems as part of the exercises.

When I got to New York, I found the museum was closed. I went next door to Housing Works Used Book Cafe. I bought two books which I found quite interesting. Then I sat down and had a chicken gyro.

The first book I got was an old Daw paperback, Gordon R. Dickson, Naked to the Stars. I had never seen it before. It was about the conflict between diplomacy and military expansionism when people contact alien cultures. Gordon R. Dickson is a very interesting writer.

The other book I found was a book by a radical political artist who focused on the issue of labor. Lynd Ward is famous for his novels composed completely of wordless woodcuts. Wild Pilgrimage a novel in woodcuts combines art deco style and german expressionism.
http://paganpressbooks.com/jpl/LYNDWARD.HTM This is a link to some of his illustrations for the novel Frankenstein.

Wild Pilgrimage is a very stark novel with strongly drawn lines. A working man leaves hellish factories to work in the fields. He watches the hanging of a black man. Then he gets a job working on a farm. The color changes from black to orange as he imagines seducing the farmers wife. He travels from farm to farm. The drawings are very stark. Then he sees guards breaking a strike. His thoughts turn violent orange and he thinks of exploitation. He attacks a guard and gets killed.

Even though there are very few words, the emotional impact is strong enough to explain what is happening. It reminds me slightly of Charles Burns' work, Black Hole.

On Saturday September 27, 2008, Housing Works Used Book Cafe, in Manhattan, New York, is hosting an open air bookfare where they are selling used books, dvds, and cds for $1. This is the fourth year they are doing this. It is listed on their events page. I won't be able to go, but I thought it might be interesting.
http://www.livefromhome.org/events/
Posted by Book Calendar at 6:29 AM

If you are interested in woodcut novels, see my book, Wordless Books: The Original Graphic Novels.

I will be speaking about wordless books this week in New York, Sept 25, Thursday at Columbia University in the Butler Library, Room 323 from 6-7:30pm.

I found a copy of it in our library system. It looks like something worth reading. I'll probably get it in the newt four or five days. However, there is only one copy available so I can't be 100% sure. Thanks for the correction.

Gordon Dickson helped me develop my strong sense of cynicism and critical thinking. I don’t think I have read all of his books but I just looked in my data base and have read 53 of them. He put together some very entertaining novels as well as some stories that made me think and as a teen reading them, making me think must have taken quite a bit of talent.

I like to think Gordon R. Dickson's Final Encyclopedia was the inspiration for Wikipedia. Mr. Dickson was a brilliant man and an original thinker.