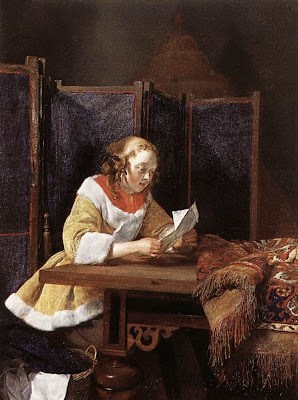 Gerard Ter Borch (1617-1681)A Lady Reading a Letter
Good Morning
This morning, I finished watching Sleeping Beauty, the Disney 50th anniversary platinum edition. I really enjoyed this animated movie. The thing that set it apart from other animated movies was the score. The film was filmed around the ballet of Peter Tchaikovsky, Sleeping Beauty. The animation was synchronized with the music, and many of the scenes looked like dancing from a ballet. This separated the movie from many other animated movies I have seen. I also liked the artwork. It seemed to have a touch of the Eastern European style. The scenes of the three good fairies granting wishes looked very much like russian style animation with each wish.
There were a few things which I hadn't learned before. In most of the childrens stories I have read, I did not learn the princess's true name was Aurora. I always thought it was Briar Rose.
The blu-ray dvd also included the Peter Tchaikovsky Story a Disney short on the life of the composer that was distributed before the film was released. This added additional historical context for the film which made me appreciate the animation even more. This is a film well worth watching with your children.
The Drinky Crow show is going on Adult Swim on November 23, 2008 at 12:15 a.m. in the wee morning hours. If you want something that is completely gross you might want to watch this. At moments it can be funny, but mostly it is too over the top for me. I do like Tony Millionaire's Sock Monkey, but this is extreme. It is definitely for adults.
I also read Collins Best Practices, Difficult People Working Effectively With Prickly Bosses, Coworkers, and Clients by John Hoover. The book is fairly short. If you want an outline on how to deal with different types of people, the Slave Driver, The Black Hole, the Minutiae Monster, this might be helpful. I thought it did not have much depth.
It explained some strategies on how to minimize conflict including how to use constructive criticism and rewards to get people to do their work. The four steps of constructive confrontation are conversation, covenant drafting, giving feedback, and celebrating accomplishments. It reminds people that firing is a tool of last resort.
The book is something which most people can skip. There are only a few things worth reading. It does give a nice bibliography at the end of the book with suggestions of books to read. The book could have been better. I am not putting a picture up of this one.
Hmm. Now, I see. I think you would much rather that I wrote about things like current events, poetry, and fiction. Nothing really work related. This means I am skipping reviewing Collins Best Practices Managing People Secrets to Leading For Managers by Barry Silverstein which I found much better than the first book. It has quotes from Peter F. Drucker, Jack Welch and numerous short one page case studies from companies like IBM and Dell.
Instead I should focus on something to escape the long days at work. I am starting on reading Mary Elizabeth, Painless Poetry. One of the things I promised to do on my vacation was write a few poems for you as well as myself. Something relaxing and easy to follow. It is time to let go and forget about work for a little while.
Not Doing
Today is a day
For not doing
Not cooking, not cleaning
Not writing, not reading
Today is a day
For being tired
Not working, not striving
Not thinking, not leading
Today is a day
For being lazy
Not walking, not running
Not driving, not cycling
Today is a day
Where I rest
Not sorting, not filing
Not organizing, not arranging
Today is a day
Where I lay down
Not watching, not listening
Not feeling, not imagining
Still I can't close my eyes

I am feeling lazy this afternoon. I don't usually take naps, but this time today I did. I feel a little less wound up than I usually am.

Laying on the futon

I am studying slack

Hang up my spine on a rack

Lay down on my back

I feel very laid back

On another note, I found a silly little contest called "Pimp My Bookcart."
http://www.unshelved.com/PimpMyBookcart/2008/
Posted by Book Calendar at 6:11 AM

Very good poem. I feel that the relaxed style expresses your mood very well and captures the feeling on being slightly lazy and tired at the same time.