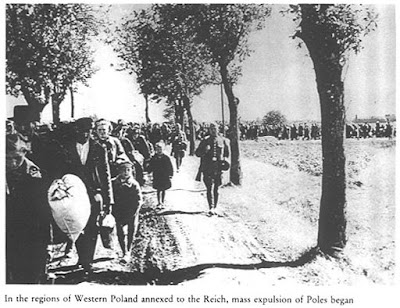 Mass expulsion of the Poles by the nazi Reich in 1939.

Refugees
I feel a little remiss for not having written something earlier. This is a kind of hard topic for me to write about. Philosophically, I believe more democracy in the world can help stem the tide of refugees. Because I am not a particularly violent person, I support the notion of nonviolent ends to bring more democracy to the world. Numerous dictatorships have fallen recently because of the educated will of the people. http://aeinstein.org/organizations/org/FDTD.pdf This is a free ebook From Dictatorship to Democracy by Gene Sharp.
People are more likely to flee oppression and dictatorial rule than open democracies. Genocide is often the product of harsh dictatorial regimes. Also, in democratic regimes people have a tendency to not starve.
Many of the problems of todays refugees stem from totalitarianism and genocide. Every day we see news about genocide in the Congo and Sudan. There is always some new atrocity being committed. Now, they no longer call it genocide, they call it ethnic cleansing.

The perpetrators claim they are cleansing an area of a particular people. Of course, it is not genocide because they are not necessarily killing all the people, they are instead forcing many of them to become refugees. This is a link to the Merriam Webster definition of "Ethnic Cleansing".
http://www.merriam-webster.com/dictionary/ethnic%20cleansing
Every "ethnic cleansing" creates refugee camps where the people from a particular ethnic group are concentrated into a camp where they wait for help. These refugees are forced into neighboring countries where they bring chaos. This is an interesting article on the chaos which has been caused in Chad from Sudan.
http://www.iht.com/articles/2008/02/11/africa/darfur.php
Oppressive regimes have learned it is impolitic to committ genocide, but it is still somewhat acceptable politically to force people from their homes into refugee camps. The people are not dead. But many seem to be waiting to die. Many of the camps seem like concentration camps with open doors.
I do not have a solution for this. It is an eternal problem. Sometimes being aware and telling others is the only thing you can do. The euphemisms being used in todays media are misleading at best. They are designed to lull you into accepting things which are inhuman.
Posted by Book Calendar at 8:15 PM