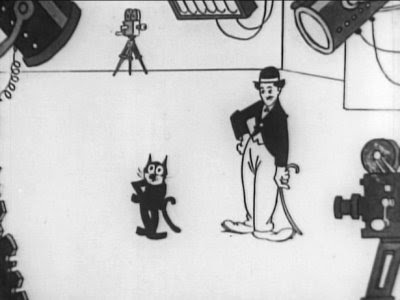 Felix The Cat with Charlie Chaplin.

Yesterday was a thoroughly unexceptional day. I read a bit of DC Showcase Presents Batman, Volume 1 on the train home. It was 500 pages long of different batman stories. These were the old fashioned stories, the ones that inspired the television show. You had many of the classic batman characters, the riddler, the joker, penguin, hypnotists, crooks, and thieves. The stories were not that extreme. They had this wonderful hokey, gosh wow quality which is missing from most of todays comics.
Also, the poetry program did not do too badly, we had people come in and out reading several poems. Most people did not stay. There were fourteen people who came in and out to read poems. One of the teenagers who hangs out in the library had a notebook full of stories and poems which were quite good.
I put the book, The Van Rijn method : the technic civilization saga by Poul Anderson. Poul Anderson is one of the classic science fiction writers. I am hoping this collection of short stories will be excellent.

I've spent some time suggesting some black history books. A lot of our patrons like non-traditional histories on Africa. They have an interest in authors like Cheikh Anta Diop and Ivan Van Sertima who are quite interesting. I also suggested some books on somewhat interesting subjects, the Maroons, slavery in the Caribbean, Darfur, the history of Ethiopia, Kush, Axum, and Niger, and other background subjects.

Posted by Book Calendar at 3:25 AM

It is kind of necessary. When you work in a community with a large African American community they need to see some books which shed a light on African history. We emulate Rome, but if things had gone a little differently we would be emulating Carthage which is in northern Africa.