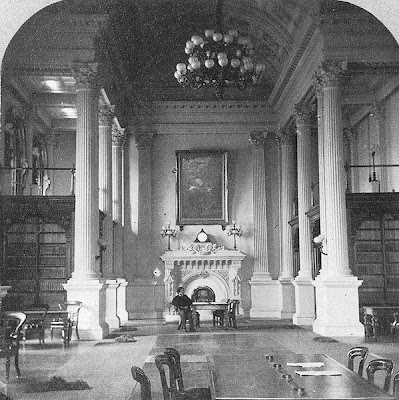 Daily Thoughts 7/30/2009 I did some more weeding in the large print section today as well as the 700s. It is all about consistency. There has been an increase in the use of large print because we have the bookmobile going out more often to the local armory. This means we have to get better material for the seniors to increase circulation.
The library has set up two more laptops for working with the collection. So there are now three laptops to work with the collection.

I'm thinking about programming again. I have not written any poetry in a while. We are going to have a gentleman doing a session teaching poetry in August.

Our computer technician is printing up some signage for genre section in the new books area; romance, African American, mystery, and science fiction. I found another site for African American fiction http://www.mosaicbooks.com/ .

This is a list of the Eisner Awards from San Diego Comic Con. They are the premier awards for comics in the United States. The Eisner Awards are named after Will Eisner one of the greatest comic book artists. http://www.comic-con.org/cci/cci_eisners_main.shtml

On the way home, I read some of the book, In Search of Excellence Lessons From America's Best Run Companies by Thomas J. Peters and Robert H. Waterman, Jr.. In its time this book was a bestselling business book. It is also considered by some to be one of the best business books ever written. I have just started on it. Mostly, it sounds like common sense so far.
Posted by Book Calendar at 6:29 AM