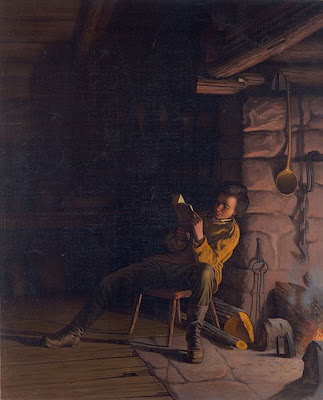 Right now I am looking at some H.G. Wells books from the mezzanine (storage). They are titles like The World Brain, Social Forces In England And America, Mankind in the Making, and The Way The World Is Going. I enjoy spending time in the mezzanine because our library is over a hundred years old. H.G. Wells wrote a number of books on history and the social sciences in addition to the science fiction he was mostly known for.

There are many titles from when our library first opened. Right now, I am looking at books to see if there are any rare titles. I probably will be looking at holdings records from Worldcat http://www.worldcat.org/ as well as maybe looking up some price records using different book search engines from the Bibliomania site list. http://www.bibliomania.net/bookSearch.html This site has lots of useful tools if you are interested in collecting books or just learning about old books. If you look at the ACRL Standards for transfer between regular collections and rare book collections it mentions both Worldcat and book pricing. http://www.ala.org/ala/mgrps/divs/acrl/standards/selectransfer.cfm
In the morning, I did a bit of weeding in the large print as well as had some books shifted. In the afternoon, I read through the Publishers Weekly and checked to see what plays were currently running on Broadway.

I read some more of In Search of Excellence on the train home, only a chapter though. I was a bit tired so I most relaxed.

Even though I checked out Batman Gotham Knight the animated movie, I did not check it out for the cartoon. It includes an hour long documentary, Batman and Me: The Bob Kane Story who was the creator of Batman. It is an interesting story. It shows Bob Kane's interest in cartooning; his start at Fleischer Studios, then DC Comics, and his eventual creation of batman. There is also mention of Bob Kane's book Batman and Me which is an autobiography.

The documentary has some wonderfully odd moments in it. Batmans cape and outline was modeled after Leonardo Da Vinci's flying machine, and the Adam West Batman television show came about partially as a suggestion from Hugh Hefner at Playboy. Bob Kane also was supposed to have spent an afternoon with Marilyn Monroe. He seems to have tried to emulate Bruce Wayne's propensities in real life.

One of the narrators was Mark Hamill, who played Luke Skywalker in Star Wars. Stan Lee, the creator of Spider Man and many Marvel comic books also talked about his experiences with Bob Kane. The documentary was much better than the cartoon Batman Gotham Knight.
Posted by Book Calendar at 3:28 AM