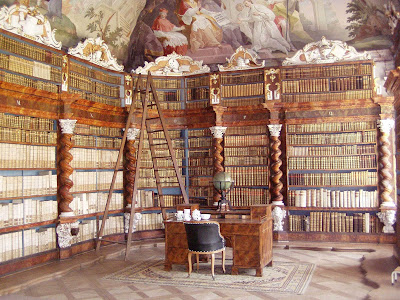 This morning I wrote a rough draft of a review of The Windup Girl while I was on the subway coming in to work. I always try and get a seat. Sometimes, I have to miss a train. It is hard to read standing up in the subway. I find it comfortable enough to read or write when I am sitting down.

This morning, I adjusted some of the signage for the "New Arrivals" section. I am going to order some signage for the tables for the current events display. I also looked at the headlines in the news and picked out a few titles on modern day piracy. There is an especially good book called Dangerous waters: modern piracy and terror on the high seas by John S. Burnett. There is a little bit on Somali and Indonesian piracy in the book. I find it kind of interesting in a ghastly way.


There is an article on the Espresso Book Machine in the October 5, 2009 Publishers Weekly. In the next six months 40 of them are supposed to be put into production throughout the United States.

I am going to shift from weeding the 800s to weeding the mass market paperbacks and trade paperbacks. This is going to be part of a large shifting project which will start soon. I spent some time with a colleague looking at the best way to move books. It should be a fairly large project.

Right now I am looking at a book called Confessions of A Radical Industrialist Profits, People, Purpose-- Doing Business By Respecting the Earth, by Ray C. Anderson with Robin White. He owns Interface, Inc. one of the greenest companies around. The book is printed on recycled paper, uses soy based ink, has no dust jacket, uses biodegradable and recyclable glue, and uses varnish instead of plastic laminate. In other word it is designed to be a green product.

I also have The Quiet War by Paul J. McAuley in front of me as well. I'll decide which one to read on the train.
Posted by Book Calendar at 10:03 AM

That's really fantastic: even a glimpse of a book comforts and inspire - wow! Photo of Library of the monastery of Nová Říše, south Bohemia, Czech Republic put me under a charm.
The precious memories awaken...though I never was in Czech, but my own library looks alike, and thus I experienced again the best time of my life .
Thank you for the sharing what's worthy indeed.

I like the pictures of the old monastic libraries from Europe, they are very beautiful.