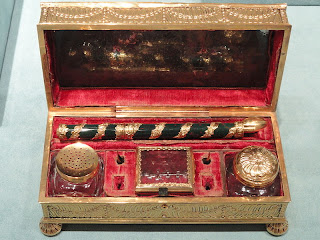 
This morning I finished reading Idea Man by Paul Allen.  The book reads very much like someone who has repeatedly fulfilled his wishes including owning two sports teams in Seattle, starting a Jimi Hendrix museum, funding Spaceship One, owning an ocean going yacht, and traveling all over the world.  At the same time it has a hard driven edge to it focused on working at computers and having repeated bouts of cancer.

Today, I did some more minor things.  Checking the displays and Twitter account, putting in some finishing touches for some flyers and policies and writing a description of the Friends of the Library book sale.

The Friends of the Library are downstairs setting up the book sale right now for tomorrow and Saturday, June 10 and June 11 from 10:00 a.m. to 4:00 p.m.  I had to a chance to look over what was there.  There is a very nice selection of fiction, especially African American fiction as well as nonfiction.
Posted by Book Calendar at 9:07 AM