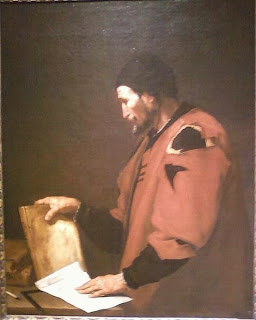 On the train to work, I read some more short stories in The Hunter and Other Stories. I especially liked the crime story "The Kiss-Off".

We had an early staff meeting. We discussed different issues around the building. As always, the coffee and bagels were good.

I spent some time talking to a colleague about The Strategic Plan for our department. I have to spoken to all the people in my department and have a long list of ideas. Now, I have to massage it into a report.

I also spent some time talking to WEDC Women's Enterprise Development Center about their doing a First Steps for Small Business Program at the library on February 12 and February 13 from 6 p.m. to 9 p.m..

A colleague is finalizing the computer classes schedule right now. She is better at formatting and laying things out than I am.

I spent a little time adjusting the shelving in the new books section and shifting around books.

Several devices are charging right now for tomorrow, the Kindle Fire, The Ipad Mini, and The Google Nexus 7.

There is a Social Media class tonight in the Computer Lab focused on Facebook from 5:30 p.m. to 7:30 p.m.

http://www.buzzfeed.com/isaacfitzgerald/the-first-people-stephen-king-followed-on-twitter Libraries Reinvent Themselves for the 21st Century

Posted by Book Calendar at 2:08 PM