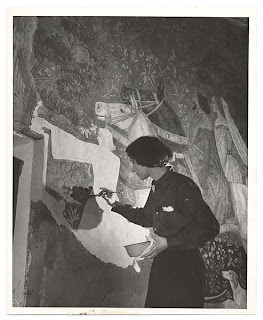 Identification on verso (handwritten): Mural executed in true fresco for Mount Vernon Public Library, Mount Vernon, N.Y. Designed and executed by Louise Brann. Louise Brann], ca. 1936 / unidentified photographer. Photographic print : 1 item : b&w ; 25 x 21 cm. Federal Art Project Photographic Division collection, circa 1920-1965, bulk 1935-1942.
This image is a work of a Works Project Administration employee, taken or made during the course of an employee's official duties. As a work of the US Federal Government the image is in the public domain (17 U.S.C. §§ 101 and 105).

This morning, I had the day off because I had a floating holiday I had to take by the end of the year.  I spent a little bit of time reading.  At 5:00 p.m., I left and took the train to Mount Vernon, New York so I could go to the city council meeting.  I did not read much on the way; instead I thought about what I would hear.

Proposed Cuts Leave Mount Vernon Library
http://mountvernon.dailyvoice.com/politics/proposed-cuts-leave-mount-vernon-librarys-fate-unclear
I am observing how things are going.  I learned today that the last time a library in New York state was closed over a decade ago when the Corning Public Library closed.  They reorganized and reopened.  It is odd being in what would be considered an unprecedented situation.

I was at Mount Vernon City Hall in council chambers today at 7:00 p.m.  It was not as packed as it was the last time I was there.  There were still quite a few people who were standing.  People spoke for 2 1/2 hours on the budget.  The city council had proposed a 6.7% tax hike which many people could not afford.  The social security payments went up 1.7%.  Many people are on a fixed income and cannot afford the increase.  Some people were describing how they might have to abandon their property or go into forclosure.

There had to be a special vote by city council to bypass a 2% cap on property taxes.  Not a single speaker from the public in the entire 2 1/2 hours was for the proposed budget.  There were lots of questions about how money was being spent and who was being hired.

The current cut of $250,000 might be enough to shut our doors. It could also lead to additional cuts because we might lose the Mount Vernon Public Library central status.

People spoke from our union, our board, and the public spoke for the library.  Another concern is that we are a landmark building from an institution that has existed for over a 100 years.  The YMCA across the street from us which is now closed was also over a 100 years old.

The library had quite a few employees there.  I was there to observe.  It is hard to be impartial when your livelihood and the livelihood of every single person you work with is at stake.  I get reminders from a variety of people every single day to keep my head down, work hard, and not say anything.  I try to follow what happens every single day.  I also realize that what is happening is much more than myself; it requires people who work in the library to stick together, gather support, and be positive.
Posted by Book Calendar at 9:40 PM