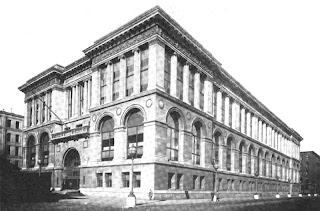 Photograph of the "Public Library of the City of Chicago", 1920

On the way to work I read some more of Management Basics for Information Professionals.  I am reading about budget management.  Budgets often determine what will be done during a forthcoming year.  Something which I like to have happen is have some of the collection monies available throughout the year.  There is quite a bit of time sensitive material which needs to be purchased.  For example it is good to buy extra copies of the Police Officer Exam if we know the exam is happening in a month.  Another example is being able to buy assignment books for the schools at the same time they are being assigned.  The New York Times Book Review is also a weekly release of the newest titles, something which we should be able to get very quickly to stay on top of what people want.

I checked the displays and the Twitter and Facebook accounts for the library.  I also checked the gift books and spent some time looking at the new books.  There are some new professional books like Defusing The Angry Patron, 2nd Edition by Rhea Joyce Rubin.  There is also a Jack Campbell book, The Lost Stars, Tarnished Night.  It is military science fiction in the same setting as his lost fleet series.  The story is about rebellion on the Syndic or corporate worlds.

I also spent some time looking at news stories on CNN and Yahoo News for the current events and biography display.  I started putting away some of the holiday books from the displays.  I also spent a bit of time checking the African American fiction setting and the fiction paperbacks.  I have been filling in some of the books written by popular authors like Mary Monroe, Brenda Jackson, and Dean Koontz.

This evening, I am going to the City Council Meeting at 7:00 p.m. on the Budget Estimate.  Sometimes, it is important to repeat yourself.  The meeting was canceled tonight.  There appears to be an impasse right now.  Mount Vernon Officials Still Haggling Over Budget.  http://mountvernon.dailyvoice.com/news/mount-vernon-officials-still-haggling-over-budget

Libraries are More Relevant than Ever
http://www.nytimes.com/roomfordebate/2012/12/27/do-we-still-need-libraries/libraries-are-more-relevant-than-ever

Telling the Story of the Public Library
http://publiclibrariesonline.org/2012/12/telling-the-story-of-the-public-library/
Posted by Book Calendar at 7:19 AM