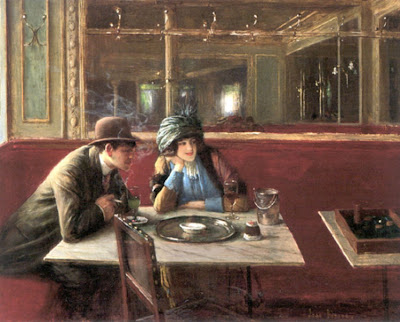 Jean Béraud Au Café -- The image seemed to be classic.

Obama won the election. It is kind of an anticlimax. I hope it goes smoothly and he really does bring some change. More than anything else, I am very glad Sarah Palin is nowhere near the white house.

I placed Carthage Ascendant and A Secret History by Mary Gentle on reserve. These are alternate history novels. I also placed The Mammoth book of best crime comics / edited by Paul Gravett on hold as well.
Good Evening
Today went like clockwork. Everything was very predictable and smooth. I spent an hour setting up a new display for the main room on energy issues; alternative energy, oil, nuclear, energy efficiency, clean technology, and similar materials. Then I spent an hour weeding books from the social science. Then an hour putting in new looseleaf pages into the New York Code of Rules and Regulations. Then an hour selecting materials to order for the computer books section. Finally, I took an hour dinner. Now, I am sitting here thinking about what to say.
The Graveyard Book by Neil Gaiman came in for me to read.
The Media Savvy Leader by David Henderson
I had some time to read some more of The Media Savvy Leader by David Henderson. My favorite points in this book is that we are all now part of the media. Anyone can use a cell phone to take pictures, or a camcorder to record an incident. People are often at the scene of events as they happen before the news get there. Disasters like Hurricane Katrina and the London subway bombings are witnessed directly by people who record the incidents as they happen.
The second point is that everyone can also be part of the media. There is nothing stopping people setting up blogs or posting videos to youtube. People may not be reporters, but they are definitely participating in the media process. A leader or a CEO should be part of that process or lose out as an effective communicator.
I really liked this idea and the way it was presented in the book. It is one of the reasons I am blogging right now.
I have a few points to make about the book. The style is very journalistic, even if it is personable. It is like sitting across the room from a media pundit. There are very few spelling and grammatical errors. I only found one on page 217, the word conjures was spelled congers.
There was also only one picture in the entire book on page 220 of a learjet. It would have been nice if there were some more pictures in the book. Chapter 11, which talks about citizen journalism could have really used some photographs.
Posted by Book Calendar at 2:37 AM

Sincerest thanks for the brief review, and for catching a typo. As this was an advance copy, we shall make appropriate corrections.

Thanks for coming by. I did get a chance to finish the book and I am hoping to do a longer review soon.