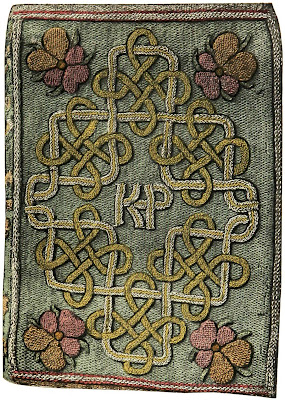 Embroidered bookbinding, The Miroir or Glasse of the Synneful Soul, manuscript by the Princess Elizabeth (later Elizabeth I of England) at age 11, 1544, and presented to her stepmother Catherine or Katherine Parr. "...Translated 'out of frenche ryme into english prose, joyning the sentences together as well as the capacitie of my symple witte and small lerning coulde extende themselves.' ...dedicated: 'From Assherige, the last daye of the yeare of our Lord God 1544 ... To our most noble and vertuous Quene Katherin, Elizabeth her humble daughter wisheth perpetuall felicitie and everlasting joye.'

Last night I read a bit of You Are Not A Gadget by Jaron Lanier. It is a very nice counterpoint to some of the stranger ideas that are coming out of Web 2.0 and the technology field. He takes on the idea of the noosphere (the totality of the web and information) being a superbenevolent thing. He also attempts to counter the rather irrational idea of the Singularity, that not far from now, machines will become smarter than us. Personally, I think if machines become intelligent and free willed they will go in a far different direction than we can imagine because ultimately they will be different than us.

Jaron Lanier focuses on the individual being more important than the mob and decries the focus on massive networks of people instead of unique thought by a single person. He tries to counter the focus on smart mobs and makes statements against the idea of a massive totality of information without identifiable authors. There has been a tendency by many people in the technology industries to discount the importance of authorship and people being identified with a work.

On a personal level, massive impersonal networks can be a bit disconcerting to me. I often ponder Aristotle's statement on Masters and Slaves in his book Politics, " For if every instrument could accomplish its own work, obeying or anticipating the will of others, like the statues of Daedalus, or the tripods of Hephaestus, which, says the poet, of their own accord entered the assembly of the Gods; if, in like manner, the shuttle would weave and the plectrum touch the lyre without a hand to guide them, chief workmen would not want servants, nor masters slaves. " I sometimes think that we have already reached the point where automation can bring greater freedom, but are having problems with society that don't let it happen.

While reading the February 1, 2010 issue of Publishers Weekly, I came across a book which should be quite interesting, The Reader on Reading by Alberto Manguel. He also wrote The Library At Night which is quite entertaining, especially if you are a book person.

In the February 8, 2010 issue of Publishers Weekly, there is an article called The Single Copy Web by Sarah F. Gold on Pp. 17-19. It is a profile and interview of Jaron Lanier focusing on the book You Are Not A Gadget. This book is something worth reading. It challenges a lot of Web 2.0 ideas at just the right time. It reminds us that so many people are losing their livelihoods because of changes in the way information is disseminated, especially artists, musicians, and writers who depend so much on copyright and other creative institutions.

Two things came in for me to read next week, Charlie Huston, Sleepless and Adam L. Penenberg Viral Loop From Facebook to Twitter, How Today's Smartest Businesses Grow Themselves. Also the movie of Ask The Dust came in. It is based on John Fante's novel.

I am on vacation next week. I worked a bit today on my online class, Fundamentals of Collection Development and Management, getting some census data and reading an article on library marketing. I also cleared up my desk and wrote a few emails.

Posted by Book Calendar at 6:52 AM

Labels: jaron lanier, pubishers weekly, you are not a gadget