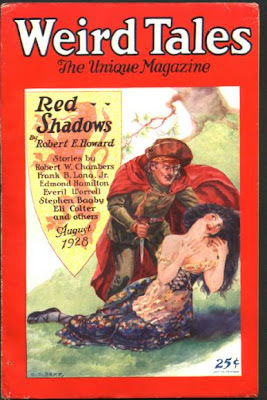 This is the cover for the Weird Tales, August 1928 issues. It contains Tennessee Williams first published story sent in when he was 16 years old, The Vengeance of Nitocris, a historical fiction piece for which he was paid $35. The cover is a picture from Robert E. Howard's story Red Shadows which introduced the character , Solomon Kane.

This morning I relaxed and read a few comics. I read several issues of The Cartoon History of the Universe by Larry Gonick which was kind of interesting.

Is Google Building a Library of Babel? by Anne O'Sullivan (Article From LISNews, February 20, 2010) http://www.lisnews.org/google_building_library_babel

You could make another interesting statement. Gordon R. Dickson, a Canadian science fiction writer wrote a book called The Final Encyclopedia where all the knowledge of man was stored in a single place in a satellite orbiting the earth. The person who controlled the satellite, controlled the future. Although it is not a satellite, you might call Wikipedia an attempt to create a kind of summary of all human knowledge. It is far from there yet, but people are certainly attempting at the beginnings of this with some of the social media sites focusing on knowledge management.
There are many interesting fragmentary memes floating around the internet and through culture about books and libraries. One of my favorite is "The Cemetery of Forgotten Books." This is described in Carlos Ruiz Zafon's book, The Shadow of the Wind. It is where the last copy of every forgotten book goes in a labyrinthine structure underground. The keepers of the place have to choose one book which no one else remembers and read it for themselves.
This very much reminds me of the idea of every single book having a reader. No matter how strange or apparently useless or unorthodox, somewhere out there, there is a reader who wishes to read it. Alberto Manguel in his book, The Library At Night, argues that we should do everything possible to keep every book that ever existed because some day, somewhere someone might want to read it.
This brings out another point, if every book deserves to find a reader, why should it not be scanned into a database of every book in existence in the hopes somehow it will be easier for that one person who needs that particular book to find it somehow no matter how obscure it is.
This brings up a counter argument which I heard that a book is a "cultural object"-- a physical object made for cultural or spiritual purposes. Thus, it has value outside of being part of ephemeral code in a machine. Removing the physicality of the object makes the experience different. Scanning it for reference may be of use in finding the book, but the actual experience of reading the book as an object is different from reading it on a screen.
These are some philosophical, but often impractical digressions from memes about books and reading that I have seen recently. Of course more fragments will come into play turning into memes, because social networking is by nature fragmentary and often fails to provide complete coherent thoughts about anything at all.

I did not read a book today. Instead, I purchased the Sunday New York Times for $5 which is a lot of money for a newspaper. Now, I can understand why some people are turning to reading the news on the internet. It is far easier to filter and focus on what you are interested. The main thing which held my attention was the front section of the paper which contained a number of exclusive articles which were not plastered all over the internet.