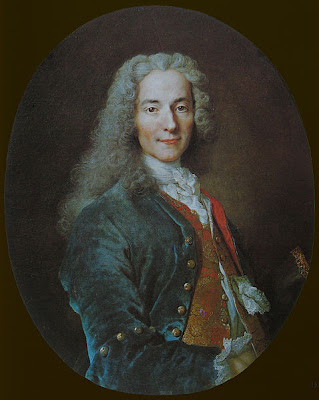 Nicolas de Largillière, Portrait of Voltaire, 1718, Oil on Canvas
Daily Thoughts 2/2/2010
I have been reading more of The Book of Dead Philosophers. It is quite insiteful. Politics and philosophy often lead to an untimely death, especially during the reign of the Roman emperor Nero. It seems best to do like the legend which says Lao Tzu disappeared from history on the back of a water buffalo as he crossed the border. I liked the idea that the heart of Voltaire is at the Bibliotheque Nacional in Paris.
Today has been a nice quiet day. I read the latest New York Times Book Review and made sure the displays were in order. I also put in my vacation and conference requests for the year.
I just discovered that John Fante's book, Ask the Dust was made into a film. I reserved it and hope to see it soon. John Fante is a very talented writer. He regularly corresponded with Charles Bukowski.
On the train home, I read some more of The Book of Dead Philosophers and learned another tidbit of information, Charles Darwin is buried next to Sir Isaac Newton in Westminster Abbey. The book is not scholarly, it is more of a popular book meant to entertain and impart ideas.
Posted by Book Calendar at 9:51 AM

Labels: the book of dead philosophers