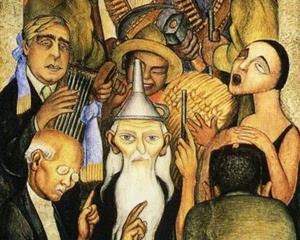 I finished reading The Thrilling Adventures of Lovelace and Babbage by Sydney Padua on the way to work.  It is an intellectual and historical graphic novel with lots of speculation in it.  The characters have many wonderful eccentricities.  Ada Lovelace was the daughter of Lord Byron and there are descriptions of the pull between poetry and mathematics.  Charles Babbage was wonderfully inventive, but easily distracted.  This makes for an excellent pairing of characters in the graphic novel.  The end of the graphic novel includes diagrams for a plan to build an analytical engine.  There is also an appendix with letters written about Charles Babbage and Ada Lovelace.  This is a wonderful, intellectually curious graphic novel.

I checked the displays and the gift books.  I also picked up some more paper surveys to process. We are closed to finished with the survey. I also checked the flyers next to the circulation desk.

The May Bookpage came in for me to read.  I have a stack of review literature to read including Booklist, The New York Times Book Review, Library Journal, the Times Literary Supplement and the May 2015 Forecast from Baker and Taylor.

I placed the book, The Three Body Problem by Liu Cixin on hold.  It is Chinese hard science fiction.

515 people have taken the Mount Vernon Public Library so far.


Inside the Office of a Bestselling Author
http://www.washingtonian.com/blogs/capitalcomment/books/inside-the-office-best-selling-author-david-baldacci.php

Libraries Are Paving the Way for Cultural Unity
http://www.huffingtonpost.com/ellen-riordan/libraries-cultural-unity_b_7155146.html

Cultural unity is not necessarily a good thing.  Having more diversity leaves more options and choices on the table.

Do We Need Libraries?
http://www.forbes.com/sites/stevedenning/2015/04/28/do-we-need-libraries/

Posted by Book Calendar at 4:12 AM