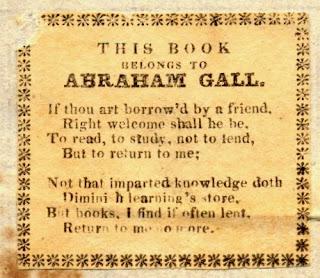 An ex libris poem by Abraham Gall.  From Wikimedia.

This morning I checked the displays and updated the Twitter account.  I also took some time to call people who signed up for the Mount Vernon Writers Network on Thursday.

We are having the Biography Book Club this afternoon.   It should be interesting.  We had a few more people this time.  We discussed people from New York.  A few of the people we talked about were Paul Robeson, Damon Runyon, Fierello LaGuardia, and Langston Hughes.

The book In Other Worlds SF and the Human Imagination by Margaret Atwood came in for me to read. I put the book Now you see it : how the brain science of attention will transform the way we live, work and learn by Cathy N. Davidson on hold.

I spent a few minutes making sure that the computer lab was set up for the Intermediate Computer class in the evening.  People are starting to ask about more advanced classes.

I spent a few minutes looking at the advertisement for the Sony Reader PRS-T1 which is a Sony Reader with Wi-Fi access. The PRS-350 which we have does not have WiFi access.

I read a bit of In Other Worlds.  It is a collection of essays about writing and speculative fiction. One of the wonderful things about Margaret Atwood is her ability to take very geeky ideas and make them intellectual.  She can write about superheros and compare them to Gilgamesh or Odysseuss in a seamless manner.  One moment she can go from talking about her childhood superhero superbunny and the next she can talk about the literary origins of Batman, Superman, and Captain Marvel.

At the same time, her writing has some very literary qualities.  The Handmaids Tale, Oryx and Crake, and The Robber Bride are superb writing.  She even comes up with a new word for fantastic stories "Wonder Tales" to pull together science fiction, speculative fiction, slipstream fiction (an entirely new term), and fantasy.

I took a break from Lynda.com today.