Inflatable Space and Near Space: A Thought Experiment 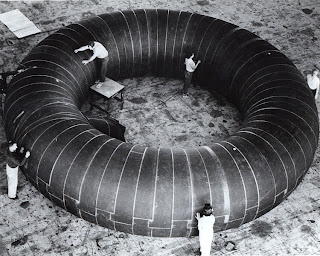 Unlike many other early space station concepts, this design actually made it out of the concept phase and into production, though no models were ever flown. This particular station was 30-feet and expandable. It was designed to be taken to outer space in a small package and then inflate in orbit. The station could, in theory, have been big enough for 1 to 2 people to use for a long period of time. A similar 24 foot station was built by the Goodyear Aircraft Corporation for NASA test use. The concept of space inflatables was revived in the 1990s.


Inflatable Space and Near Space: A Thought Experiment


I am in a whimsical mood today.

Imagine if more inflatables were used in the space program. Imagine if the Transhab inflatable space station module was built. http://en.wikipedia.org/TransHab . Bigelow Aerospace is trying to do this right now for commercial space. http://www.bigelowaerospace.com/

The Goodyear Aerospace Corporation built an inflatable module for space in 1961.  There is even a description of a spaceship from NASA with inflatables as part of its structure.
http://en.wikipedia.org/wiki/Inflatable_space_habitat

I learned something new, NASA's early inflatable spacecrafts were called Satelloons.  There is something intriguing about this.  It only adds to the idea that balloons were successfully launched into space.
http://www.theatlantic.com/technology/archive/2011/02/nasas-early-inflatable-spacecraft-the-satelloon/71362/

Space X which recently launched a rocket for NASA has teamed up with Bigelow Aerospace to create a partnership.  http://www.huffingtonpost.com/alejandro-rojas/spacex-plans-flights-to-p_b_1534663.html

Something to note about building the Bigelow facility for the commercial space station.  It is projected to cost $500 million to build by 2015.  The International Space Station according to the GAO General Accounting Office of the United States cost $100 billion to build. That is 200x more expensive. Inflatables are far less expensive.

Now imagine if they used a rockoon to launch the transhab module into space. http://en.wikipedia.org/wiki/Rockoon  . It might be far cheaper to use rockoons to launch payloads into space. Arca is developing a manned rocket attached to a balloon. http://www.googlelunarxprize.org/lunar/teams/arca/about

There is another option which is not quite an inflatable, but is interesting.  There is a plan to launch Atlas rockets from a high altitude airplanes.  The name of the company specifically is Stratolaunch.  http://www.stratolaunch.com/

How about imagining if you could get rid of the rocket completely and just let a blimp lift cargo directly into orbit. JP Aerospace is working on a concept craft which would take an airship all the way to orbit. There is even a book called Floating to Space: The Airship to Orbit Program (Apogee Books Space Series) by John M. Powell.

Both rockoons and the airship to orbit make getting to space potentially much cheaper. http://www.jpaerospace.com/


How about if you didn't use an airship to get to full orbit, but to near space. Maybe, the airship concept won't work. You could possibly build a stratostation http://www.jpaerospace.com/dssoverview.html

A stratostation might even be useful for automated high altitude airships used for communications and radar. Sanswire is an example of this. http://www.sanswiretao.com/

You might even attempt to tether cables to the stratostation and then haul cables through the upper atmosphere to make a two stage space elevator. I have no idea if this would work, I am not an engineer. It is an idea. That is what a thought experiment is about.  This is kind of an idea that probably won't work because of the physics involved.

Now you have inflatable modules for living in space. Link them together and you have an inflatable space station. This is a launching point for the moon. Why not build yourself an inflatable habitat on the moon. They are testing one in the antarctic. http://earthsky.org/space/nasa-tests-inflatable-lunar-habitat-in-antarctica

Of course you can't forget power. How about an inflatable solar power satellite for near space.  http://www.freepatentsonline.com/6111190.html

There is also the idea of high altitude wind power which is supposed to collect more wind energy than ground based wind.  http://en.wikipedia.org/wiki/High-altitude_wind_power

There are now designs for near space solar power platforms which makes near space even more interesting.
http://eprints.soton.ac.uk/69761/1/Harnessing_High-Altitude_Solar_Power.pdf

What is your next step? Build yourself an inflatable mars ship. Link together several transhab modules in a row, build a truss system around it, add an engine in the back, and a command module in the front. Again, it is just a thought.

You can land your spaceship, inflate your mars habitat, then send your inflatable mars rover to explore http://www.popsci.com/military-aviation-amp-space/article/2008-09/inflatable-surveillance-balls-mars

Thus you have inflatable space. It all sounds far fetched in a way. It is a thought experiment which I have sometimes pondered.  It is a short break from reading.
Posted by Book Calendar at 9:49 AM

You can build an inflatable Space Elevator. See http://spaceshaft.org

Thanks for the link. It is very interesting.

Thank you for the thoughts and links!

Literally every day we're working on the airship, balloons, engines and other stuff we'll need for Airship to Orbit. It's still a long ways out but the progress is fast and furious.