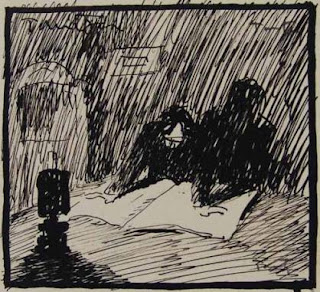 On the train this morning, I started reading A Thinking Man's Bully Unstuck In Time, Unburdened by Convention And Liberated from Fact by Michael Adelberg.  This is an advanced reading copy given to me by Library Journal.  The story is about a man in psychotherapy who has a history of being a bully.  This drives one of his friends to committ suicide and his son to try and committ suicide.  There is a callousness to the book which is quite surprising.

Things have been rather steady today.  I updated the Facebook page and the Twitter account.  The number of social media followers for the library has been increasing steadily.  I also checked the displays.

Also, our Sony representative came by and showed the new Sony Tablet which was rather interesting.  We took some pictures with the tablet, took a lot at the book Alice In Wonderland, and tried out some applications.  There was also some discussion about the Sony E-readers and what was coming next.  The Sony representative was nice enough to donate some books to the library.

We also had a public demonstration of the Sony Ereaders for the patrons where we showed people how the Ereaders worked in the computer lab.

I am going to New York Comic Con on Thursday.  It should be interesting.  If you work at a library, there is a special "Kidsa Day" promotion for librarians. For your customers and patrons, New York Comic Con hosts a “Kids Day” on Sunday, October 16, the final day of the show. Children and tweens under 12 are welcomed to attend the Show and literary programs at no cost on Sunday. NYCC will support this in your library with posters, bookmarks and pins. If you'd like to make Kids Day available through your library please email Jul Sifers (jsifers@reedexpo.com) with New York Comic Con; they would be happy to send you all the information and material to share this free event with your community

The book Designing With Web Standards 2nd Edition by Jeffrey Zeldman came in for me to read.

I spent some time making sure the computer lab was set up for the Beginning Computer Class tonight this evening which was from 6:00 to 7:00 p.m..

I read some more of A Thinking Man's Bully on the train home.  It is a very psychological novel.  I think it is a deeply revelatory book.  It shows how behavior passes from father to son.  The main characters son becomes a bully like his father. The story is quite macho in points.  Some of the characters play hockey which is a very physical sport with lots of contact and fighting.