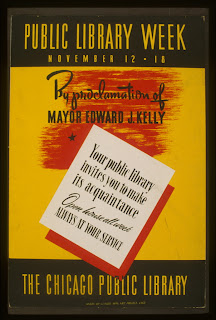 This morning, I updated the Facebook and Twitter accounts for the library.  I also spent some time learning Microsoft Excel 2007 on Lynda.com.

I have been following the bits on libraries and Occupy Wall Street.  There is quite a bit out there.  Right now, I am watching as events unfold.  I find it rather interesting that there is a literary component with a poetry anthology, library, and book coming in December.  I am being a bit random and just pulling articles which I liked and seemed interested in.  Think of it as uncataloged browsing.

It looks like it could have some very interesting intellectual underpinnings. There is a sign that there could be some writing worth seeing soon.  I don't think that I will visit the physical site.  I know that Urban Librarians Unite has visited the protest site.

While I was reading through this, I noticed that the Twitter feed for the library went up on October 10, 2011 and the Facebook page went up on September 26, 2011, so the social media presence for the Occupy Wall Street Library is fairly new.  I can't really endorse them.  The thinking is still very loose and amorphous.

I also have questions about whether Occupy Wall Street supports entrepreneurship, microlending, more local manufacturing like the maker movement, creative forms of work like coworking, green business, and projects focused on community improvement through business.

http://www.nybooks.com/articles/archives/2011/nov/10/zuccotti-park/?pagination=false
Note the date on this article, November 10, 2011 about 12 days from now.

Occupy Librarianship: 5 Variations on a Theme

Why The Occupy Wall Street Movement Has Libraries

From Chomsky to the Onion: What's on the Shelves at Occupy Wall Street's Library

Protesters Hone The Art of the Movement

Occupy: The Intellectual High Ground-- From The Guardian in London

Occupying Boston and Beyond, With Tent Libraries for All
http://www.nytimes.com/2011/10/22/us/tent-libraries-occupy-boston-and-beyond.html?_r=2&hp

For Quiet Moments Between Protests, a Growing Library

http://cityroom.blogs.nytimes.com/2011/10/24/for-quiet-moments-between-protests-a-growing-library/%20
This is the third article I have found about the Occupy Wall Street Library from the New York Times.

http://www.schoollibraryjournal.com/slj/home/892496-312/occupy_wall_streets_library_keeps.html.csp
I find it interesting there is a children's collection.

http://robot6.comicbookresources.com/2011/10/occupy-graphic-novels/%20
The theme of V for Vendetta seems popular.

As A Revolution Takes Root, A Library Grows

What are Occupy Wall Streeters Reading?
http://blogs.publishersweekly.com/blogs/PWxyz/?p=7416%20
There it is, Publishers Weekly, now there are most of the library magazines I read.

http://www.radicalreference.info/content/rad-ref-occupy-wall-street-one-report-back
Radical Reference has been around for quite a while.  My opinions are different than theirs.

The Occupy Wall Street Library-- from the New Yorker

The Library at Occupy Wall Street, The Peoples Library

The Press Release for the Occupy Boston Library

The Youtube Video from October 10, 2011 on the Occupy Wall Street Library.  This is a link.  I am not embedding anything.


Lovelorn and Seeking A Bailout of the Heart -- A Little Poetry.

Posted by Book Calendar at 3:44 PM