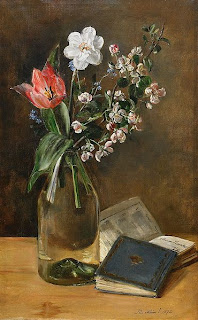 I read some of Without A Net Librarians Bridging The Digital Divide this morning on the train to work.  The author is describing how the library is often the only free place in many communities for internet access.  There are many adults who do not have access to a computer.  At our library we often help people who have never used a computer fill out job applications, request government forms, and acquire an
email account.

This afternoon, the computer lab was opened from 2:00 to 4:00 p.m..  Several people came in who had attended the Tuesday night computer classes to practice typing and using the word processor.  People are starting to ask about Excel and web design classes.

This morning, I updated the Twitter and Facebook account.  I also checked the displays.  We got a large donation of young adult books.  Many of them were 2011 practice books for the SAT, PSAT, and AP classes.  There were also a variety of books on Shakespeare.  In addition there were a few books on the Ipad and the Ipod which were new.

This evening, we are having the Mount Vernon Writers Network from 6:00 p.m. to 8:00 p.m. in the Grace Greene Baker Community Room.  I am looking forward to the meeting.

The Mount Vernon Writers Network went well.  We were discussing incorporation for the organization as well as bylaws and officers.  This is the first time I have had this experience.  There is a core group of people who are coming every evening that the organization meets. We also read some poetry later in the evening.  There is a plan to do a public performance in Mount Vernon in December of poetry.

I also spent some time reading Without A Net on the way home.  The author is describing key terminology for libraries in how librarians talk to people who are new to computers.  A lot of the material is how to show people the basics of what a computer is, how to use a mouse, and how to use vocabulary people who have never used a computer understand.