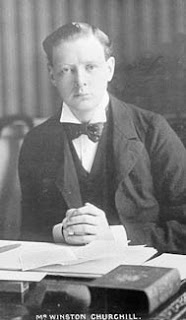 I read some more of A First Rate Madness.  The author is describing Abraham Lincoln's fits of melancholy as well as Winston Churchill's suffering which Churchill called the "black dog."

The author posits there is a relationship between depression and empathy.  People who have experienced depression are more able to be empathic.  He writes about depressive episodes
in Martin Luther King's life as well as Mahatma Ghandi.  It is an interesting if not completely believable hypothesis.

This morning I checked the Facebook and Twitter account, checked the displays, and looked over the gift books.  We got a large donation of new large print books with many popular authors like Danielle Steel, James Patterson, Catherine Coulter, Nicholas Sparks, and others.

I spent some time weeding and also spent some time discussing test books with a colleague.  I am preparing a fairly large order of civil service exam and professional exam books.

I also had some time to read the New York Times Book Review and Publishers Weekly.  In the October 3, 2011 issue of Publishers Weekly, there is a review of Crafting With Cat Hair by Kaori Tsutaya translated by Amy Hirschmann.  This made me question what I was reading.  Luckily, there is also a review of How To Fix Copyright by William Patry which looks quite interesting.  William Patry has worked for Google on copyright.  It is coming out in January of 2012.

On the way home, I tried to read more of A First Rate Madness, but found it was no longer to my tastes.  The author was describing the polio of Franklin Delano Roosevelt and the Addison's disease of John F. Kenndy.  At this point, I decided to put away the book and read some haiku. There is going to be another Writer's Networking Event on October 20 from 6:00 to 8:00 p.m..

Your Personal Information Is Valuable You Should Hoard It
http://www.hackerfactor.com/blog/index.php?/archives/448-Privately-Held.html
Posted by Book Calendar at 10:13 AM