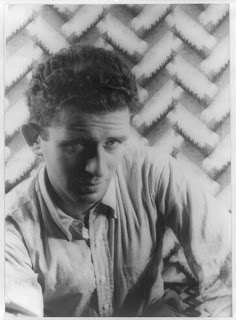 
I am going to Literary Brooklyn tonight, an event that is listed on the New York Librarians Meetup at 6:00 p.m.  It is at the Princeton Club of New York on 15 West 43rd Street.  It should be quite interesting.

The Princeton Club was a nice place.  I checked my coat, kept my bag and went to the event.  I was a bit late for the event, so I did not see everything.  Evan Hughes was talking about the book, Literary Brooklyn: The Writers of Brooklyn and the Story of American City Life.  He also had slides of many of the authors he was talking about; Pete Hamill, Alfred Kazan, and others.

As always, this is my impression of what I heard and saw.  It is also some of my personal commentary.

The talk was entertaining.  Each chapter he read from had a different set of authors and was in a different time period.  He talked about Norman Mailer, Carson McCullers, Arthur Miller, and many important literary figures.  Evan Hughes also tied the figures to the life of Brooklyn.  He mentioned how different neighborhoods attracted different kinds of writers.

Throughout the reading, he mentioned a number of different books, Bernard Malamud, The Natural,  Chaim Potok, The Chosen,  and February House by Sherrill Tippins were a few of the books talked about.

There was a brief question and answer session after the book talk.  Ethan Hughes answered a question about The Amboy Dukes by Irving Shulman, something I had never heard of before.  He also talked about how Park Slope was starting to attract authors.

I found the talk informative.  On the way out, I noticed that Mobile Libris was covering the book sales.  Ethan Hughes signed book after the talk was over.

It was a very nice chance to see an excellent author talk.

There was also a breakout after the event with the New York Librarians Meetup.  We went to Starbucks and had coffee and talked about librarianship.  Two of the librarians were new to the profession.

There were a number of different resources discussed including My Metro which is an individual membership to the Metropolitan New York Library Council.  http://metro.org/individual-membership/   There was also some discussion about the New York Librarians Meetup blog http://nylibrariansmeetup.blogspot.com/

I spent some time talking with the group leader about resources.  She suggested that I should look at Booklist, possibly join My Metro, and talk to the people from Urban Libraries Unite.  She also mentioned that I might want to create an online portfolio which is different than a resume.
Posted by Book Calendar at 6:46 AM