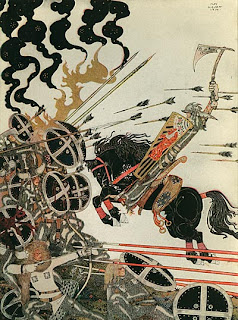 Kay Nielsen Illustration from East of the Sun West of the Moon, c1914

Tonight is my late night. This morning, I did some desk cleaning. I got rid of more old phone books, processed some law material which had been laying on my desk for a while, and went through some of my piles of paper. I am one of those people who are a paper magnet. I attract paper to my desk. We got a directive to clean all of our desks. So, it is a cleaning day.

When I did some desk cleaning, I went back to weeding more business books. The section is starting to look much better. I like to have 8-12 inches at the end of each shelf. I can put bookends in the shelves now.

Every day this week, I am going to do a little bit of weeding and desk cleaning.

Apparently, my business book orders are doing well. Some of the books I am ordering are getting two or three hundred holds already. Many of the titles like Michael Porter's Competitive Intelligence and The Complete MBA for Dummies are new to our library cooperative. So far, I am pretty happy with the orders that are coming in.

We also got a new octagonal book display with three levels. The book display itself is kind of ugly, but it is very functional. You can display books in a 360 degree fashion. There are a lot of new books being displayed.

I reserved a few books, Lord Tophet by Gregory Frost which is the second book in a fantasy series, Sly Mongoose by Tobias Buckell. I am really looking forward to reading Sly Mongoose.
I also had a chance to look at the New York Times Bestseller List for Business and reserved The Drunkard's Walk How Randomness Rules Our Lives by Leonard Mlodinow.

I spent a little bit of time picking out films for the September and October films. I am going to do an anime and a science fiction film this time. We also ordered a new microphone for the Open Microphone poetry readings. One of the patrons didn't like the current one which is not working too well. We are going to do a Spades card tournament. Cards are a dollar a pack, so it is another cheap program activity you can do.

Today has been very busy.

I was reading Reaper's Gale by Steven Erikson on the train this morning. Reading this book is quite an experience, there is not a single main character. Each chapter seems to have a different viewpoint character. The story is almost historical in sweep. There are at least five main characters, Rhulad Sengar-- The Emperor, Karsa Orlong, Icarium Lifestealer, Fear Sengar, Silchas Ruin, and others. This makes the story quite interesting.

In the front of the book, there is a large map of The Empire of Lether where much of the action takes place, and a list of three pages of Dramatis Personae, these are broken down by nation or status, Letherii, Tiste Edur, The Malazans, The Awl'Dan, and Others. The names of the characters are very interesting along with the place names.

However, because there is so much action, and so many intrigues the book reads like a giant jigsaw puzzle with many pieces. I just read through it enjoying the characters who are mostly very dark in their natures.

In addition in the back of the book, there is a two page glossary describing different made up things in the fantasy setting, everything from nasty brutish creatures to weapons to groups like the Patriotists who are the the nationalistic thugs of the Letherii empire.

The book is practically impossible to review in many ways because describing the plot would take several pages. Even figuring out what is happening can be quite tricky. There are many different factions in the book with opposing goals.

Despite this I am enjoying the book. I don't try and figure out all the twists and turns, I just read taking in the complexity of the wording, the names, the setttings, the place descriptions, the characterization, and marveling at how the author can put together a book, no less a series with eight books in it that are this complex.

The setting often switches between tribesmen and city dwellers, gods and men, warriors and scholars. This is what makes the book so interesting to read.

The book is very dark and bloody. There are ghosts, demons, witches, shamans, and all the things that go bump in the night. However, they are not the familiar fantasy creatures for the most part, and they are described very differently than most other fantasy books. The names like Emlava-- a sabre tooth cat say it all.

The setting is a fantasy empire, The Empire of Lether. It is kind of hard to pinpoint where it would be in terms of time. The setting is not medieval, and it is not quite roman. It has that feeling of a bygone age much like Robert E. Howard's Cimmeria might where things mix and flow together.

This is book seven in the series. It is a tome of a book. 823 pages long of complexity. There is an eighth book in the series coming out soon.

Posted by Book Calendar at 1:11 PM