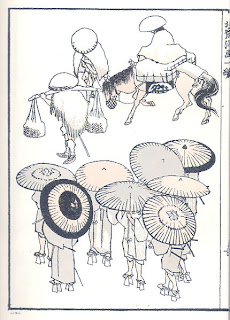 I watched three short half hour episodes of InuYasha. It was kind of fun. The story was not very complicated. A girl falls down a well and finds herself in medieval Japan. She turns out to be a protector of a gem which can give demons spiritual powers. InuYasha is a half demon fox, half human person who lusts after the gem. Kagome Higurashi, a fifteen year old girl must stop various evil entities from getting ahold of the gem, but it is broken into many pieces. An entertaining lighthearted story. There is some mild non-frontal nudity without any exposed breasts or groin. It is an anime specifically written for teenagers. It is rated 13 plus.

Anyways, I also read The Discworld Graphic Novels. It was solidly entertaining, but not as entertaining as the books. I think the graphic extrapolation of the stories could have been done much better. The books were both better written and much funnier than the graphic novel. Still, it is fun to read about Cohen the 87 year old barbarian, Rincewind the magician who cannot cast spells but somehow survives everything he encounters, and Twoflower the visiting tourist.

There are parodies of evil trolls, monsters from the dark, death, the mystical magic shop, dragons, and barbarians. This all of course occurs on Discworld which is a world on the back of a turtle with four giant elephants on top of the turtle supporting a disc where various mythical kingdoms live. The story starts in a mythical place called Ankhmorpork.

If you are looking for an afternoon or morning of light entertainment this graphic novel is worth reading. However, it is not spectacular or exceptional. Still, it is sort of worth reading. The books by Terry Pratchett are far better than the graphic novel. I espeically liked Making Money.
I have started reading Wikinomics. The book starts with the story of Goldcorp who decided to put all their geological data on their mining site since 1948 and offer rewards for people who could identify where the gold was for their mining corporation. This made them lots of money. They got lots of responses from a variety of web resources.
Posted by Book Calendar at 11:11 AM

We will pay your review in your blog;
* Earn cash by writing honest reviews about our advertiser's products and services.
* Write reviews in your own tone and style, and gear them to your audience's interest.
* You will be pay 6$ - $100 /reviews.
* Pays via Paypal

I am not interested in being paid for reviews unless you are a literary establishment. Please leave.