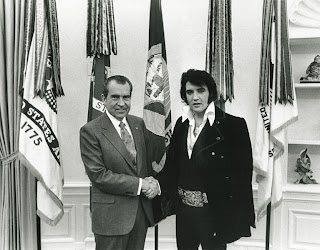 This image was taken by a government employee. I think this image is in the public domain. Anyways, there it is a great photograph of Elvis with Nixon.

I don't know what happened to me yesterday morning. I couldn't get myself to write anything at all. Right now, I am drinking my coffee a little bit before noon. I read a little bit of Snopes this morning. A little odd and humorous news.
http://www.snopes.com/daily/index.asp

I am trying to do very little. I went to the laundromat yesterday and read some more of Manga The Complete Guide by Jason Thompason. Jason Thompson is an editor for Viz publisher which publishes manga. It was a very interesting book to read through. One of the huge faults with this book is that it only reviews manga from Japan that has translated into english. There is no coverage of original American manga from companies like Tokypop, Del Rey Manga, or Darkhores. There is now a lot of manga style comics being written by authors from others countries than Japan like Korea, China, and Canada.

Still the book is quite interesting. It reviews manga from the very beginnings starting with Four Immigrants Manga all the way through 2006. It uses a star rating system for the different manga comics with stars and half stars. I think it is pretty accurate. There is a lot of material covered Ranma 1/2, Lone Wolf and Cub, Iron Wok Jan, Harlem Beat, Sailor Moon, and a huge variety of subjects are covered.

In addition to the coverage of individual reviews there are two page overviews of different subjects in manga like Cooking, Crime and Yakuza, Fantasy, Japanese History, Otaku, Martial Arts, and many other subjects. This is quite interesting. It also includes discussions of the more risque material in manga, cross dressing, gay and lesbian, and sex.

There are separate review sectsions for Yaoi and Gay Manga, and Adult Manga. As part of its rating system, the book discusses many of the issues with differences in culture. The Japanese have very different taboos about nudity than westerners or people in the United States. They also have a tendency to include sexual innuendo about little girls. This is something we are careful about in our library.

We have had some interesting issues with Sailor Moon and older men (There is even a "Sailor Moon" fan made dating sim which is quite creepy.) Because of the issues of sexuality, we have to be very careful when ordering things for teenagers. Some of the material goes right to the adult section where there are less problems.

Still even in the adult section, the material can be quite explicit. I was surprised at how explicit Path of the Assassins was. It is on the top 50 bestselling manga by Diamond Comic Distributors. Just because something sells well does not make it non-explicit.

There is a glossary and an artist index. The artist index includes the titles they have published as well as links to their website if it is available.

The book has numerous black and white illustrations of covers. The back has a photo credits section. There are also a few panels from different manga in the book.

I think that this is an excellent guide to Japanese Manga. The key here is that it only covers manga in translation to english from Japanese. This is an awful lot of material.

I looked at 101 Ways To Promote Your Website by Susan Sweeney, C.A. . In a way I was not impressed with the book. On the cover it says "Main Selection of Computer Books Directs book club" I wanted to see if this club still existed, so I looked it up and the membership is closed. There are also a lot of complaints Computer Books Direct from various people. This knocked the book down a little bit in my mind. I also read the very short section on blogs and was not impressed with her suggestions for promoting blogs. They were very basic. So, I am putting the book down for now.

I also took a few minutes to start reading, Wikinomics How Mass Collaboration Changes Everything by Don Tapscott and Anthony D. Williams. It seems entertaining so far. They have a blog promoting the book which has a nice fluffy branded feeling to it. http://www.wikinomics.com/blog/

I went to my local library today. However, I got there a bit late. The computers were closing in fifteen minutes so I decided to take a pass. I picked up a few items to read, The Darkness, A Vampire Huntress Legend by L.A. Banks and The Discworld Graphic Novels The Colour of Magic and The Light Fantastic by Terry Pratchett. I am hoping this will have a nice dose of humor in it. I also picked up a DVD, Inuyasha, I have not watched any of the television series anime, I have watched quite a few anime movies that are stand alone. So, this will be a slightly different experience for me.

Entrecard is still not working on my home computer. I wish they could tell me what was wrong with it, but they have not been able to.
Posted by Book Calendar at 10:25 AM

It sounds as though you are having a bit of a busman's holiday..I think thats the correct term... a holiday where you are sort of doing your job at the same time you are on vacation? Anyway, its interesting to hear your comments about Manga and the different ways cultural taboos apply. Its a small world, but we really are all very different.

And snopes is ALWAYS good reading;-)

I always read a lot, and in a way it is my job. But, it doesn't include all the paperwork, customer service, and office politics so it is the part of my job I like doing without all the nonsense.

If my job is reading comics (I do have to read reviews of a lot of graphic novels and comics) I really don't mind it.

Hi, I've included you in a meme, I hope you will participate. Visit my site for all the details. http://elvisloverblog.blogspot.com