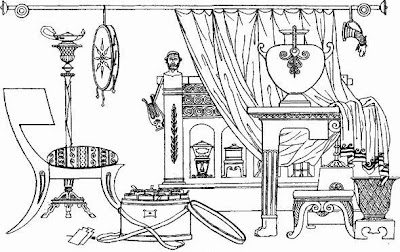 Roman study Showing scrolls or books in a "scrinium", also lamp, writing tablets, etc. Source: Illustrated History of Furniture From the Earliest to the Present Time By Frederick Litchfield Available from www.gutenberg.org Published: 1893

I watched the new Star Trek film today. Although, it was an enjoyable film, I did not like the changes they made. Destroying the planet Vulcan and changing the time line was not that appealing. The person who played Captain Kirk did not seem strong or decisive enough for the role.
Also, the villain, the Romulan miner Nero was not very convincing. I was hoping for a stronger villain. The movie was a disappointment. I am hoping that they do not continue the new Star Trek with this story line. I liked the old story line much better.
I had a chance to walk up to my local library today, but I did not check anything out or use the computers. It looks like they have had a considerable reduction in funds to buy new material.

Right now, I am reading more of Social Intelligence by Daniel Goleman. The author was discussing the concept of I-It (treating people as objects to reach a goal) versus I-You (trying to create relevant social connections between people. He is describing how it is important to talk about the other person early in conversations.). The book is quite substantial. I can finish a chapter or two a day. Much of the writing is worth pondering.

This is why I like Paolo Bacigalupi so much. It is a link to the short story, The Gambler. http://pyrsamples.blogspot.com/2008/11/fast-forward-2-paolo-bacigalupis.html

Posted by Book Calendar at 7:31 AM