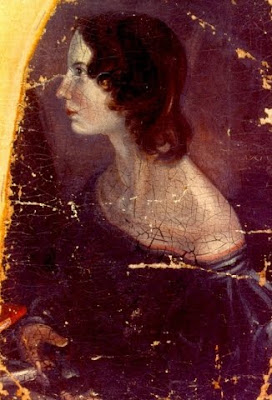 Portrait of Emily Bronte by her brother Branwell Bronte

I was at Barnes and Nobles near my house. I bought a copy of the childrens book, Brown Bear, Brown Bear What Do You See by Eric Carle. Eric Carle is a wonderful childrens author. His illustrations are full of color and his message is very simple.

I looked at the science fiction and fantasy section, but did not see anything which I wanted to get this time. A lot of the books are about demons and vampires with a touch of noire. Occassionally I don't mind fantasy noire, but most of the time I like my fantasy to be a little more lighthearted with princes and elves and such. I also like original military science fiction. Most of the stuff I am seeing coming out is long winded series. The Charlaine Harris section in the fantasy area is huge. She is very much a writer about vampires.

I took a look at the sample section of Baen Books yesterday and read the first few chapters of Live Free or Die by John Ringo. It reads a little bit like Heinlein, more so than his other military science fiction novels. http://www.webscription.net/chapters/1439133328/1439133328.htm?blurb There is more of a plot line with intrigue and trickery than his other books. The book is coming out in February of 2010. If they have an Electronic ARC, I will probably get it.

I had a chance to briefly look at the graphic novels section as well. Something I saw which looked really excellent was an oversize book called The Art of Osama Tezuka by Helen McCarthy. It is a big, beautifully illustrated book.

I read some more of Think Again while having a quiet day. I like to read on the couch. The book has a lot on how we make mistakes based on our past experience, prejudgements, self- interest, and in general how we tend to confirm our own biases at our own expense. It demonstrates lots of examples of this kind of behavior. I can easily see it in all kinds of situations.

I just learned that Year of the Flood is a sequel to the novel Oryx and Crake which means that I must read it. This surprises me a little bit, maybe Margaret Atwood will write a science fiction trilogy.

Her writing is literary enough that some people don't consider it science fiction. They like to call it "speculative fiction". This is the nice term for fiction that plays with reality. You can throw in William S. Burroughs, Doris Lessing, George Orwell, Lewis Carroll, Jorge Luis Borges, and Gabriel Garcia Marquez in speculative fiction. It speculates about reality. Magical realism speculates about reality. Of course Robert Heinlein and Neil Gaiman are here as well. The joy and semantics of fantasy literature.

Posted by Book Calendar at 8:32 AM

There was an excellent biograph of the Bronte family on Masterpiece Theater many years ago. Wonder if you saw it?

No, I never did see it. The one thing I really liked on masterpiece theater was Anthony Trollope, The Way We Live Now.