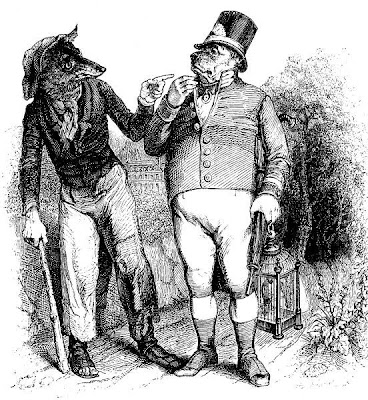 
The drawings in this graphic novel are amazing to look at. They are in a style that combines art deco with steampunk. The details are interesting and the color is vibrant. You can see things like theater posters, art lamps, and victorian art in the background. This makes the vividly drawn animals stand out even more. The variety of talking animals is rather amazing; talking fish, baboons, pit bulls, rats, cats, rabbits, frogs, moles, and other creatures. It is not at all like anime furries. The style is much closer to Beatrix Potter or illustrated children's fairytales. The image above is fairly close to the graphic novels style.


There is a lot of action and the main character is very much a fighter. The content also has some fairly strong language, sex, and mature themes in it. The French in the story do not like the British. There is a rather funny touch in the story where humans are called doughfaces and generallly act as servants or drivers for horse drawn carriages.


The story is clearly well thought out. Detective Inspector Le Brock must investigate the death of a diplomat, Raymond Leigh-Otter who is of course a talking otter. He is accompanied by his trusted companion, Ratsi. What follows is a trip to Paris in the Grandville district. The action never stops, there are chases, break ins, visits to drug dens, and a conspiracy to uncover.


The devices in the story are pure steampunk. There are automated robots, sword canes, old fashioned carbines, and of course trains. The animals are mostly drawn in period costumes from the Victorian era. I especially like how the turtle diplomat is drawn.


The setting is a Europe where Napoleon has conquered the continent and is firmly ensconced in power. England has gained its independence by guerrilla warfare. There are many references to the British being thought of as anarchists or terrorists. They even make reference to a "ground zero" where the British are thought to have blown up the French Robida tower. Not surprisingly there is a lot of political commentary and intrigue in this graphic novel. There is even a scence where people are protesting the communards in French Indochina.


This is a great story with wonderful art. Bryan Talbot is considered one of the first comic artists for steampunk. He is known for his story, The Adventures of Luther Arkwright. I think Grandville is his best story to date. He has drawn many graphic novels. Another one I can recommend by him is The Tale of One Bad Rat.


If you like comic art you will love this. Even if you don't like comic art in general, this book is exceptional in its quality. I can highly recommend it.

Posted by Book Calendar at 3:27 AM

You have conviced me on this one, I saw a review in SFX and the art work looked pretty impressive and the content sounds intriguing.

He is already writing a sequel, Grandville Mon Amour.