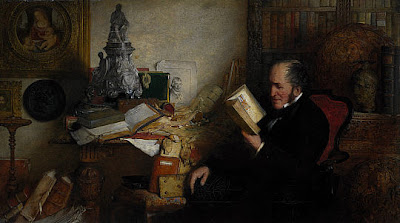 I spent some time ordering books this morning. I read the latest New York Times Book Review and Kirkus Reviews. I also looked at reviews from various sites again. We have a large year end cash infusion to order a variety of materials. This will allow me to order some graphic novel sets instead of individual issues and pick out some of the better quality titles I missed during the year for literature as well as get some newer computer books.

I am also starting the process of creating a "Graphic Novels Club". I just got a new library card for the club and put a bunch of Neil Gaiman's Sandman on hold. I see lots of book clubs at libraries, but no graphic novel clubs. Another name that was suggested was "Manga Lounge". I think "Manga Lounge" would work better for teenagers.

I read some more of Trust Agents by Chris Brogan during lunch time over coffee at the local diner. Chris Brogan has a real knack for describing nonintrusive methods for networking. He describes how to maximize contacts instead of pushing on individuals. This evening, I finished reading it. If you read carefully, he makes some useful suggestions for social media. I used a few of his suggestions to clean up my twitter account partially.
Posted by Book Calendar at 8:12 AM