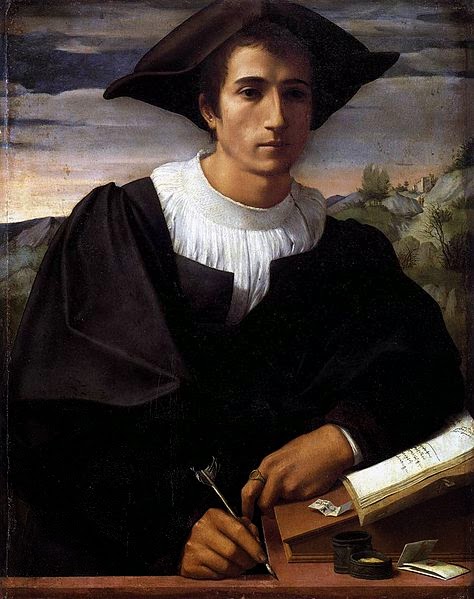 Franciabigio, Portrait of a Man, 1522


I read a bit more of Assholes A Theory by Aaron James.  Aaron James successfully describes the many varieties of assholes including corporate, boss, political, presidential, royal, corporate, self aggrandizing, cable news, delusional, and bankers.  The questions of why most are men as well nurture versus nature arises.  Ultimately the book points to culture.  I am finding it quite humorous in an intellectual way.

I also read some more of Create Your Future the Peter Drucker Way.  I rather like the Peter Drucker quote, "The most effective way to manage change successfully is to create it." I also like the idea that day by day we create the future with our own actions.

I also checked out the book, The Truth Is A Cave in the Black Mountains A Tale of Travel and Darkness With Pictures of All Kinds by Neil Gaiman illustrated by Eddie Campbell.

I checked the displays and the gift books and chose a cd audiobook to be added.  I also spent a small amount of time talking about the planning committee with a colleague.   I did a bit of work in the oversize books as well.

The launch of the Adult Summer Reading Program is on July 2, 2014.  We spent some time working with Evanced which is the electronic sign up system for summer reading.

I read The Truth is a Cave in the Black Mountains A Tale of Travel and Darkness. It is an odd book.  The pictures are paintings and the story is almost a tall tale or folk tale about revenge with a circular plot.  It seems to have a strong Scottish or Irish influence to it.

I also read a bit more of Create Your Future the Peter Drucker Way.  The second chapter talks about how there is often a lag between news and how it is effecting events.  This leaves an opportunity for people to pay attention and take advantage of things which are currently occurring that may have future impact.  It is an interesting thought.

What Does Amazon Want from Hachette Pretty Much Everything
http://www.mhpbooks.com/what-does-amazon-want-from-hachette-pretty-much-everything/

I rather like this idea.  It shows that the idea of a manned rockoon to space is more feasible.
Posted by Book Calendar at 3:21 AM