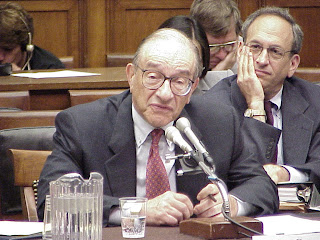 Alan Greenspan The Age of Turbulence Adventures in A New World is currently on the New York Times Bestseller list. It is 529 pages long with two sets of black and white pictures. The pictures are some of the best political photographs I have ever seen. My favorite picture is of Alan Greenspan lying on the floor of the white house.

This book is both a biographical account, a book on economics, and a story about the federal reserve. The book embodies history in the making. Because Alan Greenspan was directly involved he can talk with authority about the fall of the Berlin Wall, the World Trade Organization protests, Nixon's presidency, and his experiences with leaders around the world from China, Russia, Latin America, and other countries.

The book gives a nice sense of Alan Greenspan as a person. There are anecdotes about him like he takes a bath every morning. In the bath, he takes notes for his morning meetings. It also gives his political viewpoint. He is both an objectivist, a Libertarian Republican, an admirer of President Ford, and a free market capitalist.

Alan Greenspan demonstrates original thinking and a willingness to hold viewpoints which are not popular. He makes some interesting statements like global warming is real, the Iraq war is about oil, and the free market is useless without property rights and the rule of law. At the same time, he claims that carbon caps are futile and we should build nuclear power plants and electric cars so we can cut global warming.

The book is quite readable. There is not a lot of jargon or complex business terms. He addresses the reader directly in plain language. Despite this, the book has a tremendous amount of ideas and opinions in it.

On a personal level, there is some useful information. If you read carefully, you may learn a bit more on how to prepare to live in a complex world. For example, he claims that managers earn 57% more than line workers. The main determiner of this is reliance on highly complex technical education. It makes me rethink what I am going to do with my time.

There is also quite a bit on how the federal reserve monitors the economy. While he does not talk about how to pick stocks, he does talk about how the federal reserve effects the stock markets and banks with its decisions. There is enough on the process of business cycles, irrational exuberance, the internet, and the effects of globalization to make it worth reading if you are an investor.

There is an amazing amount of material covered in this book. It took me about a week to read this book. It is impossible to summarize everything that was written in this book. If you want to learn how economics effect the real world, this book is for you.

Posted by Book Calendar at 3:21 AM