The Atomic Bazaar by William Langewieschke 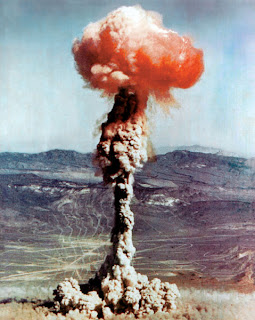 The Atomic Bazaar the Rise of the Nuclear Poor by William Langewiesche is a book about poor countries acquiring nuclear weapons. It starts out by describing what happens when a nuclear bomb blows up whether it be fission, fusion, or dirty bomb. The inital start is rather slow and a bit dense, but once you get past the first two chapters it becomes very readable. There is an interview with Paul Tibbetts, the man who dropped the bomb on Hiroshima. Paul has no regrets he did it, and thinks after 9/11 the United States should have dropped the atomic bomb on Mecca or Cairo. The book at times can be quite frightening.

The second part of the book is about how a terrorist or non-state organization might get the bomb. There is a large section on how someone might attempt to get nuclear material from Russia and the former soviet republics. There is quite a bit on the bomb making facilities and security in Russua as well as the dismantling programs funded by the United States. An interesting fact, is that the hardest part to hide is the construction of a nuclear bomb, because of all the specialists and materials needed to make it.

The third and most intresting part of the book is the story of A.Q. Khan the father of the Pakistani atomic bomb. It is a rather amazing story, a combination espionage, international greed, failure to stop the shipping of dual use products in making atomic bombs, nationalist anger, and conflict with India. The story shows the real limits on stopping proliferation the way things are being done now.

The fourth part is about how A.Q. Khan proliferated nuclear secrets to many other countries like Libya, Iran, Iraq, and North Korea. For $100 million dollars a country could buy the facilities to make a nuclear bomb from Khan's laboratories. It ends with Musharraf placing A.Q. Khan under house arrest as Musharraf's personal advisor and scientist.
William Langiewiesche writing is very concise, easy to understand, and crisp. He manages to cover all of these topics in 171 pages.

This is a really fascinating book. It gives a lot of insights into how and why poor countries are trying to get nuclear weapons.