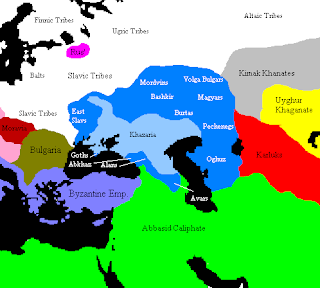 Michael Chabon, Gentlemen of the Road concerns the adventures of Zelikman, a travelling Frankish Jewish physician and his compatriot, Amram, a giant black ex-soldier from Constantinople.
This is a classic story of the adventuring pair in the tradition of the Lone Ranger and Tonto or Gray Mouser and Fafhrd. The book is very much an ode to swashbuckling fantasy. What separatesthis book from most of these books is the use of an accurate historical backdrop. Thereis no magic or fantastic creatures. The closest thing to magic is Zelikman's arab spy glass, his hempen pipe, and the medicine which he carries. There are some runes on Amrams axe but, they don't have any discernable effect. The most magical creatures in the novel are the elephants in the bek's palace.
The setting is rather interesting. The original title was supposed to be Jews with Swords which conjures up some rather interesting images. The story occurs in the Eastern Europeankingdom of Khazaria, a real Jewish kingdom that existed from 850 A.D. to 1136 A.D.. The actualyear of the story is 950 A.D. Khazaria is known for its candleabrum flag, and its wild redhaired jews. The turkic people of the area converted to judaism.
The novel itself is a light and fast read. I read it in a single night. The characters arevery entertaining. I rather like Hanukkah, a bit character who has turned to becoming a mercenary so he can buy his lover from a brothel.
There is plenty of action with the marauding Rus, the soldiers of the Bek, and the arabic Arsiya. The two main characters in the opening scene Zelikman and Amram stage a fight where Zelikman appears to die so they can make money.
Gary Gianni illustrates the story with very detailed black and white illustrations. Gary Gianni is currently drawing the syndicated strip of Prince Valiant. The illustrations in the book have a very similar tone to Prince Valiant.
It seems that Michael Chabon is hitting his stride with this novel. His last novel, The Yiddish Policemen's Union was on the Locus Bestseller List. Read the story to find out what happens.

Posted by Book Calendar at 1:16 PM

I will have to check this out. I got an advanced reading copy of Mysteries of Pittsburgh when I worked for Waldenbooks a zillion years ago and I absolutely loved it. Then I read his next book (forget the title) and Hated it and never picked up anything by him again. Thanks for the head up.

Michael Chabon wrote a few novels for young adults that are very simple in structure, Summerland, and a few others. The writing is very simplified. I like his more recent stuff. For some reason, I can't get myself to read The Amazing Adventures of Kavalier and Clay.