Perception And Format In Media 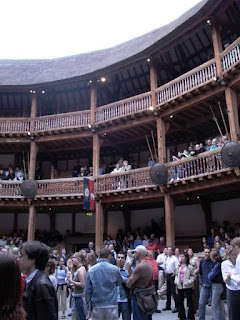 One of the things I notice a lot is that people are being assigned to read plays in high school and college. Shakespeare is one of the most assigned authors. The thing which bothers me about this is that in the class room Shakespeare is read not shown. I enjoy watching Shakespeare far more than I enjoy reading his work. In fact, there is very little effort to get people to critique the live play in the classroom setting. In effect the experience is being changed from its original intention. The context changes. Individual words on the written page are analyzed for their meaning.

Many students come in confused about Shakespeare because they have no way to place the words with the actions. They set aside the script of the book unable to understand and ask for the movie. The problem with this is which movie. Are they going to take the Laurence Olivier stage dramatization, or are they going to take the action film Romeo Must Die with Jet Li in it. This actually happens. Quite often they take the wrong movie. Those who take the video get a context for what they are reading and can understand it far better. I think generally if a first person first sees a play, then reads it, there is a better context for understanding.

However, the Jet Li problem with Romeo Must Die is not a joke. Imagine a person in high school or college in the future coming into the library and asking for the Neil Gaiman version of the dvd of Beowulf. It is not out yet, I am looking forward to the dvd. They come in and get a fantasy version of Beowulf then use it to write their class assignment. Angela Jolie as Grendel's wife is very different than original. Because, they don't want to be bothered they don't read Beowulf because it is "too hard" and they hand their assignment based on the movie. I can imagine the confusion on the teachers part. Beowulf is a lot harder than Shakespeare for many students to understand. The language is older.

Another thing which quite often happens is that people come in to get the unabridged audiobook of an assigned book like Catcher In The Rye. I think this may have an opposite effect on understanding. Although, they are not reading the book in question, they are hearing every world in the book being pronounced. If they have difficulty reading, they are still going to get the full experience of the book. In many cases, this leads to better ability to write about the book than reading the title.

Getting back to Shakespeare. I notice that very few people read Shakespeare's sonnets. They are meant to be read. I can understand people analyzing individual sonnets much more than analyzing a play.

The other thing which happens is that people read Blooms notes or Cliff notes. These are canned summaries of a book. They guarantee a canned answer which will give a student a passing grade. Many people just want to pass the class and only read the notes. These will most of the time guarantee a passing grade. How do you guarantee a person read the book with these kind of things? I don't think you can. These, however, are better than watching a movie about a book because they at least attempt at accuracy. Many people have lost that sense of value tied in with the concept of a "liberal education." Education in literature is supposed to expand your horizons...

Teachers are finally noticing the multiple formats in the classroom. Quite often people are being assigned to watch movies. Freedom Writers is a popular assignment. I haven't seen it, it is just an example. Maybe, they are asked to watch the Color Purple and comment on the film.

It is also becoming acceptable to use multiple formats for assigned topics. Many people don't even bother with reading books, they just go to the internet. This brings up the idea of authority. How do you know the information being presented to you is accurate. Let us take up the issue of Wikipedia, we say when people want to use Wikipedia, "We cannot guarantee the accuracy of this material." Apparently, Wikipedia is about as accurate as the Encyclopedia Britannica. http://www.news.com/2100-1038_3-5997332.html In away, this is both disturbing and hilarious.

Sometimes authority is more about control of access to information than accuracy. I think people are more disturbed about the loss of the authority of information than accuracy. However, with certain subjects like math, history, or science the wrong information can be presented. There is a real attraction by some students to use radical versions of history that more closely align with their ethnicity or background. These are readily available on the internet. Schools want the standard version so everyone can be on the same page. This must make it very hard for teachers on occassion.

Using multiple formats is often the best thing to do for many assigned topics. Let us take the example of Martin Luther King Jr. A college student is assigned to write about Martin Luther King Jr. Generally, watching video clips of him, listening to his speeches on audio, and reading about him at the same time will give a much better understanding than just reading alone. This is becoming expected because it gives a more comprehensive understanding of the subject.

I wish there were more forward looking teachers who both showed the video in the classroom of Shakespeare, the right one, and asked the student to read the book at the same time. Literacy in both the printed word and media literacy are becoming equally important. It is very easy to make bad decisions about media.
Posted by Book Calendar at 4:13 AM

You know, about two months ago I got myself in a huge reading fit. I read about 15 classics novels in that time. Included in those 15 was Beowulf, the first time 'd ever read it. After the first couple of pages I was worried that I'd struggle with the language but I was shocked how easy it was to understand the text if you took it slow. I feel I didn't miss anything. Another bonus of my recent reading fit was the ability to correclty answer a final Jeopardy question for the first time in what seemed like ages. That is when I also discovered they were turning it into a movie.

The movie sure was visually appealing but I don't understand why they made so many changes to something that didn't need anything.

Thank you so much for visiting my blog and leaving a comment.
~Trine

Classics should be left alone, they have shown the stories in them have stood the test of time.

My wife is finishing up her student teaching this week in English, and hopes to teach theatre in high school.

This was a great post - I'm going to send her the link to it so she can read it herself!