No Barriers for Entry In Small Scale Bookselling. 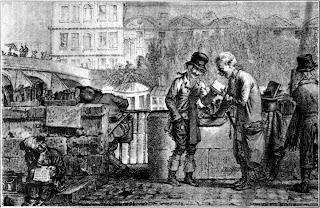 Secondhand Bookseller on the Quai Voltaire in Paris, France, 1821. In a way, it hasn't changed much.

Someone told me about http://www.bookwise.com/ a network marketing company for books. It was quite interesting. It looks like tupperware for books. There are two ways this would work, you would sell the books as an affiliate, or you would buy the books at a discount and resell them to customers. What is interesting about this scheme is that you are an independent contractor, a contract employee of the company. The contract looks very complicated. There is no storefront involved. I can imagine someone having book parties much like tupperware parties where they invite groups of people over to look at their small selection of books.

I can imagine a small group of ladies getting together to look at the latest Danielle Steel, or Debbie Macomber books. Maybe, they would pick up a small glossy catalog with a few of the latest titles. I wonder if the top seller would get a minivan instead of a pink cadillac like they give for their top sales people at Avon.

Another thing which is coming up is the electronic book kiosk. Apparently http://www.ondemandbooks.com/ is planning on setting up kiosks to print some titles on demand at a variety of libraries. All it requires is a PDF file which is fed into a book production setup. It produces a trade paperback style book at a cost of approximately a penny a page.

It doesn't take that much to sell books from a vending machine. The University of Iowa has sold both zines and handmade books directly from standard vending machines, The Aramark 111-112 snack machine will do it. This is an article on it.
http://www.futureofthebook.com/stories/storyReader$356

I was looking through the google images on book vending machines. Apparently, they aren't as uncommon as I thought. I saw images of them from Scotland, Sao Paolo, Barcelona, France, and Japan. It must only be a unique phenomena here in the United States.

After digging a little more, I found an example of a company with specifications for a book vending maching in Ireland. I wonder why it has not come here to America. It would be a very nice import. I can imagine it in subways and at the airport. The company is called Novel Idea.
http://www.novel-idea-vending.com/spec.html

If you really think about it, it does not take much to sell books in the real world as well. A table at a flea market isn't that expensive, and if you sell from a table in the street, it costs very little. Vendors on Manhattan's sidewalks are the bane of the local bookstores. They just need a tax id and a vendors license which is much cheaper than rent.

The Manhattan book street vendors also have a reputation for theft. A person can ask some Manhattan street vendors for a new book in a day which if you think about it, is not possible if they are using a regular distributor like Baker and Taylor or Ingram. Please buy from your bookstore, not the street vendors. It saves the bookstore money on broken windows and keeps them in business.

After a while, if the person is good enough at selling, they move from the street to the flea markets and eventually their own store. This usually doesn't happen. Selling books on the streets in Manhattan is a great way to end up nowhere.

Although, I've heard that selling hot dogs or morning coffee and bagels in Manhattan is not a bad way to make money if you are tough enough for it.

Of course, it is even easier on the internet. There are numerous affiliate programs for selling books. You can sell using Amazon.com or Powells.com which I am doing, or any of a number of other affiliate programs.

There are also various places where you can put together a back list of books to sell. For $25.00 a month you can set up an account on ABEbooks for up to 500 books. It is very easy to sell through their site. http://www.abebooks.com/docs/Sell/ . Alibris another service costs about the same amount and also sells music and films.

There are effectively no barriers to entry to start a small book storefront on the internet. If you only have a few books, you can simply put them up on ebay or another auction site to sell.
Posted by Book Calendar at 5:47 AM

Am thoroughly enjoying your posts---very eclectic---and finding lots of common interests. I was similarly intrigued by the 'Print on demand' phenomenon, and wrote a post on this last September you may be interested in glancing at(http://paperbooks.typepad.com/paul_burman/2007/09/print-on-demand.html). Love the Bukowski animation. Thanks.

Print on demand is a very interesting idea. It essentially means many of the newer titles will never go out of print. For a small premium of printing a single copy, you should be able to get most recent books.

Print on demand I know is becoming very popular, especially among the scrapbooking crowd. What parent doesn't want a nice hardbound book of or for their kids!

As for BookWise, I just became an associate a couple of months ago. It's not very complicated at all, is an easy entry with very low costs. I do have my own online storefront bookstore with Baker and Taylor as my fulfillment house. I get to sell books and have somebody else do all the money collecting and shipping and handling. It's great! BookWise is a young company, so I can only imagine that they will get better as they work out all of the "quirks."

With the advent of the internet, it sure has changed the way people sell things!