The Fading of the Western Novel 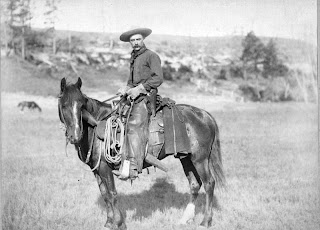 I was watching Sergio Leone's The Good, The Bad and The Ugly starring Clint Eastwood. It very much reminded me of the decline of the western novel. There is a lot to say for western novels. They have fairly strong male lead characters who face tough situations.

Unfortunately, the only people who come in to check out westerns are people assigned in class to read Jack Schaeffer's Shane or Louis L'Amour Jubal Sackett. Louis L'Amour has become a regular high school assignment. Most of our other western novels are in the Large Print, mostly older gentlemen ask for Zane Grey, or Max Brank. Zane Grey's Riders of the Purple Sage is considered a classic in western literature.

Larry McMurtry makes westerns which are more novels than stories about hard gunfighters. What is odd is that it feels like a lot of western style writers have switched to writing mysteries. Tony Hillerman writes mysteries set on Native American reservations. Joe Lansdale writes Texas mysteries with his characters Hap and Leonard. You can no longer walk into town with six guns blazing. Instead you have to be the local sheriff or detective ready to hunt down the bad man.

Kinky Friedman is president Bush's favorite author. He also writes Texas mysteries. Right now, he is running for governor of Texas. He recently wrote a book called You Can Lead A Politician to Water But You Can't Make Him Think: Ten Commandments for Texas Politics. It seems the Texas gunslinger has turned into the Texas detective.

With this decline in the western novel, it seems the image of the cowboy is being picked up in the wrong way. We hear the word cowboy diplomacy coming from a lot of people who probably have no understanding of the history of the American west. Hopefully, we will have some people who can revive the meaning of this kind of writing. It really goes to the heart of what it means to be American.

There are no more shows like Bonanza on television and very few western movies coming out. Because very few people see these things anymore and they are so loved by American politicians, like mom, god, and apple pie we see a lot of distortions. Cartoons with men in cowboy hats riding missiles or standing high noon with mullahs. This is a pretty distorted image of the wild west. Conservative and cowboy are not always the same thing.

Luckily there are still some holdouts for Western writing. Places like http://www.westernwriters.org/
Posted by Book Calendar at 12:15 PM

I wouldn't exactly call Bonanza a true-life depiction of how the west was, and while the western novel may be in decline there are still a few gems that appear every now and then that pique my interest.

One such novel I came across recently is El Tigre by John Manhold. It's an historical fiction western so it weaves in a wagon-load of factual references into the storyline, doing it so well you only notice the story. It's a great sprawling adventure story about a boy coming from Spain to the Americas and growing tough in the late 19th century gold-laden era of Texas and California.