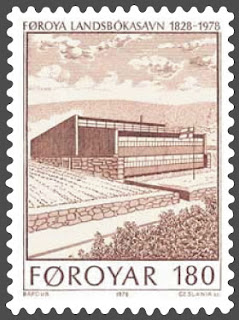 Postage Stamp of the National Library of Faroe Islands.

Like many of you, I have car troubles. I had to take my car in for an inspection. They told me that it hadn't been driven enough, I had to take it out and drive it around for at least an hour on the freeway or else the inspection equipment wouldn't pass the car. It has been quite an annoyance.

My car is still in the garage getting maintenance done. They have to change the oil, rotate the tires, change the battery, and a bunch of other things to get the car in proper shape.

Right now, I am sitting at the main library in Queens, New York. Queens Library has the highest circulation of any library system in the United States. In other words, more people use it than any other library system. In some ways, it is laid out very differently than most libraries I have been to.

First of all, the library is heavily merchandised with lots of display racks for a variety of subjects including computers, self-help, mythology, new books, bestsellers, and any of a number of different subjects. You could spend a whole day wandering through the merchandised sections of the library. The bookshelves run along the walls, while the merchandised sections are in the center. Green and white signage hangs from the ceilings which is quite visible.

I went through and looked at a bunch of different subjects and wrote down a variety of new titles for computer books. They have more computer books than I have seen in most large bookstores. They also have a greater variety of subjects on computers. I still have a couple thousand dollars of computer books to order.

Sometimes when I go to libraries or bookstores I carry a small notebook to jot down titles which I am interested in. I have several pages of books jotted down after this visit. After walking through the computer books section, I walked through the social science section and noted down a few books that looked interesting. One title which really stood out was The Blue How To Profit By Investing In A Better World by Daniel De Faro Adams and Joe Andrew.

After I was done with the more serious works, I went to the manga and graphic novels section. There were a few things that interested me. Herge's Tintin can be quite controversial, but I think we might want to get a couple for the adult section. Some people consider them to be quite ethnically and racially biased. I also am going to probably order a few books by Goscinny who does the Asterix books. These in a sense are comics classics. I am also considering getting a few reprint volumes of Segar's Popeye.

Not everything in comics is about graphic novels and manga. We still have to get editorial cartoons and comic strips. Aaron McGruder is fairly popular at our library. We also don't have many popular strips. I intend to get a few of Scott Adam's Dilbert books for our collection after looking at the queens collection.

The computer station where I am sitting is very busy. There is a very large line to use the computers. It has a very large variety of people in the lines. Queens is also one of the most ethnically diverse places in the United States.

It is odd looking at the screen because they have set the standard type to very large to help the visually impaired. It is like reading a large print book. I don't particularly find it comfortable.

I have an hour to sit here before I go back to check on my car. I checked back on my car and it won't be ready until tomorrow. It is one of those things where unexpected things happen. I'll deal with it as I go along.
I don't really have to worry about driving it unless it is the weekend or I have a specific trip I have to make. I usually take the train to work.
Something I noticed about the Queens main branch is that it is not that effectively designed for reference work. Because almost all the collections are focused on high circulation and there is not as much reference material, there are a lot less people seeking reference questions.
People come in to check out material and use the computers more than anything else in Queens. There were no really identifiable special collections at all. I did not even see a multicultural collection. There is a very large Job Information Center collection. This seems to be the main specialized collection for reference in Queens.
It seemed that an emphasis on circulating material limits the amount of research being done. A research collection is structured differently than a circulating collection. In a more research oriented collection like New York Public Library there tends to be a lot more older material and much greater depth to the collection. It also is much more prestigious because of the depth of the collection. Most of the material in Queens was new material on the shelves. I did not find this particularly appealing. It reminded me too much of a bookstore model for libraries.
Posted by Book Calendar at 12:27 PM

If you are interested, kindly mail back for confirmation(jules@bestrank.com).Please include your blog's URL.
Looking forward to doing business with you.

I haven't been to the Jamaica branch in years. But even then, it was all about circulating and reference material. That's pretty much the way the Queens borough library has always been.

Back then, (maybe still today) the NY Public Library was pretty much a stand alone beast as a research library. I recall it be completely independent from the Manhattan Public library right across the street. That one, in a non-descript office tower, was a lot more like the Queens library.

I wonder if I still have my Queens Borough Library card lying around someplace...

Exactly, the inside of the Queens Public Library looks like a giant modern office if you are inside it. It is designed for efficiency more than anything else. There are lots of computer terminals. They have a huge cybercorner in addition to self-checkout, and some machines for quick reference.

The research libraries are very different. They have an old world feel. There is a lot of wood, paintings, corporate placards, and display cases. A lot of the material is a lot older. They have things for a long time. There is also a lot of prestige attached to their collections along with private donations.

Queens gets a lot more public money from the state because of high circulation, but not as many endowments or special funding from the corporate and the foundation world.

It is an interesting contrast. I feel the library I work at is much closer to the New York Public Library research style library.