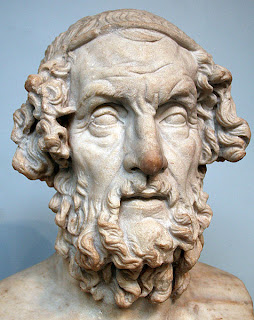 A bust of Homer in the British Museum in London.

Good morning. I had my morning coffee, so I am not feeling too bad. I watched a little bit of the 7th Voyage of Sinbad. It is much better than Harryhausen's other films. I rather like the Valley of the Cyclops. The animation for the cyclops is quite interesting. I like the way it uses a tree to smash several of Sinbad's companions.

There is a lot in this movie so far which is quite interesting. Sinbad often creates his own problems when he hires criminals who would be facing the gallows to voyage with him to the Vally of the Cyclops.

The special effects, even if they are old are quite interesting. The miniature princess that is three inches tall is entertaining, so is the scene of the four armed snake woman.

The way the story is told reminds me a little bit of the Odyssey. It is an old fashioned adventure story with gold, magic, and monsters. I will write more about it as I watch some more of the film.

I took a break from the movie and am reading a bit more of Acacia: The War With the Mein. The story is interesting, it seems to draw from African myth and legend, as well as North African history. The scenes with pirates remind me a bit of the pirates of the Barbary coasts from North Africa. The setting is a bit different than your usual fantasy setting. It seems to mix a bit of African history with Roman history.

I also like some of the themes in the novel so far. For a while, the Acacians ruled the known world through a combination of a drug called the mist and various forms of slavery including child slavery. Now they are being attacked by the Mein who consider the Acacians unjust and dishonorable.
I finished reading the novel this afternoon. It has a rather interesting and surprising ending. I will write up a review later this week.
Entrecard is still having some problems. Apparently Amazon S3 which provides remote memory storage and other applications to Entrecard is having some problems with their cloud computing system. Cloud computing is a form of distributed computing.
Amazon S3 rents applications and memory to other companies through the internet. In other words you can rent chunks of memory, internet bandwidth, and complex computer programs by the hour at reasonable rates.
Unfortunately when Entrecard added Sezwho and Diggit, it looks like the new applications disrupted the cloud computing system on Amazon S3. It is rather interesting to follow.
It is a bit annoying. It means that I will be getting less blog traffic through Entrecard. Hopefully, Entrecard and Amazon S3 will fix this soon. Still, it is rather fascinating to follow the process. I am learning something about how social networking systems can have problems.
I am trying to understand this stuff in terms of Occam's Razor, otherwise it would be completely over my head. "All other things being equal, the simplest solution is the best."
While I was at the laundromat during the evening folding clothes, I was watching television. I have a television but it doesn't work properly, you have to subscribe to cable to get any channels so I don't watch it at home. The television I have at home has a built in VCR and DVD player which is easy to use. I watch movies on my television but not any television shows.

Anyways, I was watching the news on television at the laundromat when I saw a rather interesting advertisement. Apparently T. Boone Pickens the oil billionaire has an energy plan which he is advertising on television. I went to the site and it was very straightforward. Invest in wind power, solar power, and natural gas. Straightforward, easy, something which we can definitely do. I liked it enough that I looked at the website. He says some things which are quite correct. Oil peaked in 2005 and we are sending too much money to foreign powers. Here is the link: http://www.pickensplan.com/theplan/
Posted by Book Calendar at 8:49 AM