Morning Thoughts, Afternoon Thoughts, B Movies In the Library 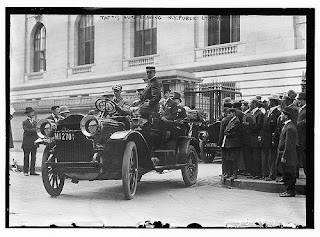 This morning, I read a little bit more of Acacia on the train as well as some of the book, The Public Domain. It was a quiet, peaceful morning. The only difference this morning is that I had half and half instead of milk in my coffee.

I also requested a robot detective novel, The Automatic Detective by A. Lee Martinez. This is a classic theme in science fiction. I rather like science fiction detectives.

When I got in to work, the first thing I did was look through the Nutshell series printed by Thomson West. They are legal summaries for different subjects like constitutional, family law, and criminal law. I requested a bunch of these be ordered along with a variety of Nolo books for our collection.

Right now, I have a copy of Iron Man the movie novelization by Peter David sitting next to me. The cover says "Based on the screenplay by Mark Fergus & Hawk Ostby and Art Marcum & Matt Holloway." That is a lot of authors for a single screenplay.

I am looking at the two copies of Vampire Hunter D, volume 1 and 2 by Hideyuki Kikuchi. The novel is being adapted into a manga comic by Saiko Takaki. The publisher is Digital Manga Publishing. The story is rated 16+ on the back of the book. It would be close to the equivalent of PG-13, maybe R, for its content. A lot of the manga publishers are now providing ratings for their books.

I saw Vampire Hunter D as an anime film a while ago. I would give the film about the same rating. It is not a childrens movie. It is full of all sorts of strange mythical creatures, vampires, werewolves, and other things. I enjoyed watching the film, I hope that the manga is just as good.

Right now, I am also contemplating whether or not I should watch Finding Neverland starring Johnny Depp and Kate Winslet. It is the story of J.M. Barrie the author of Peter Pan. For some reason, I like watching films about authors.

I can recommend another film about a fantasy author, Robert E. Howard, The Whole Wide World starring Vincent D'onofrio as Howard. It is a very tragic story.

B Movies In The Library

I got home tonight. I watched a short bit of Earth Versus The Flying Saucers. This was a 1950s film, it just was colorized recently. The special effects are by Ray Harryhausen. I think it is kind of funny. I rather like how hokie the flying saucers look. The beginning of the film is classic as soon as the aliens show up, the United States military starts shooting at them.

Watching this film reminds me of some things that have been happening with videos recently. We actually circulate more videos of movies than any other item in our collection. My experience is that these are not great videos, they are often the most mind numbing things imaginable. People love to escape. They especially like television series like the Sopranos, Gilligan's Island, the old Star Trek reruns, and other things like that.

A lot of people come in to check out movies to escape. They want the B movies which aren't in our collection sometimes. We get asked for Rambo a lot even though it is not available. Mindless horror films like Chuckie, or Freddie vs. Jason are also popular.

Also, there seems to be a preference for R rated films. Some even want the unrated versions. There really is no one watching what you bring home to your family. So, people can and will take out anything. There is not an audience like in a theater and nobody knows whether you are watching a good quality film. The only real limitation is that we don't really have anything that is pornographic.

It really is hard sometimes to say why are you checking this thing out. I actually have asked some people why are they checking out American Pie, or Norbit and the generally answer is we need to unwind and escape. We don't want to think too much, we have been thinking a lot at work and we want something which we can laugh at.

It is no different than a lot of the things at the public library in book form. Romance is the most popular item in the fictin room. It is nice to dream about having romantic notions and read inexpensive Harlequin romances sometimes.

Sometimes, you wonder about the choices being made. It is hard to fathom why someone wants to watch House of Frankenstein, or all five seasons the television show Colombo. I guess people have different ideas of what is fun to watch.

Are videos and dvds the main point of the library? It seems to be the thing which most people want more than anything else in the library. It becomes a question in the movies also what should we get. A lot of the old classics are not ever watched. However, surprisingly there is a strong demand for the old silent films and some of the classic black and white films. People want to see every old silent ever made.

At one point, I decided that I wanted to see every classic science fiction film ever made. I've seen The Day The Earth Stood Still, 2001, Godzilla, The Empire Strikes Back, Bladerunner, Metropolis, Things To Come, and a huge amount of old science fiction films. I am sure that there are plenty of people who want to see all the classic horror, detective, and monster movies ever made.

I don't always want to see things that make me think too much. I rather like The Three Stooges and I can understand why so many people love Jim Carrey movies. Watching deeply intellectual things can make your head hurt.

Still, you ask yourself, is the library an educational institution for self-education and self-improvement or is it purely for entertainment value. Is it more important to house ballet tapes or slapstick comedy. Where is the balance? I think there is not enough self-reflection on what we are doing sometimes.
Posted by Book Calendar at 7:59 AM

I don't think it's elitist of you question why people watch what they watch or read what they read. It shows you're a good librarian - trying to understand the individuals who enjoy the library's services.

The thing for me is that this kind of thing doesn't get discussed a lot. There is an academic bias in most magazines focused on libraries. They writers often want to write about what will make them appear intellectual to other librarians.

Things like popular culture items like B Movies, videogames, world wrestling entertainment and online games in the library are not discussed that much. This has certainly changed with graphic novels and some types of fiction.

I like thinking about these kind of things because they are often more important than what is appearing in library journal, voya, or other places.

I think this is part of the weakness which many libraries are facing. They haven't faced up to the idea that they are going to have to discuss popular culture in the library setting.

We may like to think libraries are about books, but they are more and more becoming about popular entertainment. Most of the people who are coming into our library are coming for dvds and to use the internet for various purposes.

I'm sorry if people are reading less, because there's no substitute for reading on your own. But I agree with you that libraries have to take pop culture into account. Isn't there any platform (other than blogging) that you can use to discuss this? Are there magazines you can submit articles to?