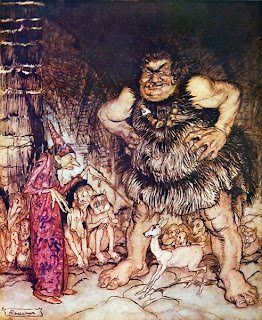 Fantasy of the 20th Century An Illustrated History by Randy Broecker is primarily about cover art for fantasy books. It contains over 400 color illustatrations of book and pulp magazine covers, and around 45 fantasy movie memorabilia pictures. This is an incredible amount of illustration for a book this size. It is an oversize quarto book 256 pages long.

This book is for those who love book covers. There are numerous people who collect books solely for their covers. They want samples of different fantasy artists work. It is the same mentality of those who collect comic books and put them in plastic bags permanently then never open them. They remember their comic books by the cover art. People do the same thing with pulp magazines and paperbacks.

If you have ever worked in a bookstore and you did any buying, you would know that every month, the publishers send many bookstores, paperback covers as well as hardcover book covers. It is a way of selling the books without giving an actual book to the store owner. I remember going through stacks of these which were kept in a big cardboard box to see if there was anything interesting to order.

Each picture contains the name of the book, the author, and the cover artist. The book runs through the complete history of fantasy books starting in the 1890s up through the 1990s. The covers are fantastic, beautifully illustrated, and very colorful.

The book also documents who were the best writers of the different time periods. All of the great fantasy writers are mentioned starting with A. Merritt, H. Rider Haggard, H.P. Lovecraft, Lord Dunsany and moving to more modern fantasy writers like Patricia McKillip, Michael Moorcock, Ursula LeGuin, Marion Zimmer Bradley and others. It is more of a chronology than an attempt to criticize the actual work of the writers.

It smoothly transitions from the pulp form to the paperback and digest form of cover. Pulps died out around the 1950s. Science fiction was the major fantastic form in 1950s. Fletcher Pratt and L. Sprague De Camp revived the swords and sorcery genre. L. Sprague De Camp was the major influence in bringing back Conan from the pulps. Also heading into the 1960s, J.R.R. Tolkien and C.S. Lewis revived heroic fantasy as well.

There is a very nice illustrated section on fantasy films. It includes classics movie posters like King Kong, Mighty Joe Young, The Thief of Baghdad, The 7th Voyage of Sindbad, as well as more contemporary films like Legend, Conan, The Lord of the Rings, and others. Included in this are some unique films like City of Lost Children, Fire and Ice, and Wizards by Ralph Bakshi.

There are very few surprise authors. The authors chosen to describe are all the central authors of fantasy. They are authors like Lin Carter, Mervyn Peake, Tim Powers, Jack Vance, Tanith Lee, Philip Jose Farmer, Andre Norton and other very mainstream popular authors. The book is not focused on award winning books.

The artists are for the most part very mainstream. The one artist who I did not see a lot of was Kelly Freas which was surprising. There were illustrations by Michael Whelan, Stephen Fabian, and other mainstream fantasy artists. There was also a brief section on fairytales which was interesting. This included some book cover illustrations by Edmund Dulac and Arthur Rackham. I consider Arthur Rackham to be one of the greatest fantasy artists who ever lived.

A surprising thing I found in the book was that there were several illustrations from the Ballantine Adult Fantasy series edited by Lin Carter. This is one of my favorite fantasy series because it focuses on high quality fantasy writing from the early 20th century.

If you want a beautifully illustrated book of fantasy art covers representing the best artists from each time period during the 20th century, you might be interested in this book. Also, if you want a chronology of who was popular and consistently well written in fantasy during the 20th century this book is an excellent read. However, it does not criticize the works of the authors, it illustrates them.
There are two other books in this series, Science Fiction of the 20th Century, and Horror of the 20th Century. The copy I bought was from the Strand bookstore, it was an oversize trade paperback. I bought it for $11.95 on sale, the cover price was $19,95. I enjoyed looking at all three of the books in this series. Unfortunately, the trade paperback is not listed on Amazon.
Posted by Book Calendar at 6:02 AM

Oh, I LOVE Arthur Rackham's art! That image just froze me when I clicked onto your blog here. Those images he drew covered a book I read as a child until it dissolved from decades of use!

Thanks for the memories!
http://www.nomorewageslave.blogspot.com

I like Rackham a huge amount as well. I esepcially like his Ring of the Nibelung drawings.