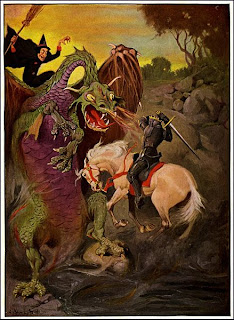 Frontispiece to chapter 12 of 1905 edition of J. Allen St. John's The Face in the Pool, published 1905. J. Allen St. John was one of the great early fantasy artists for the pulp magazines and books.

Right now, I am going through the different blogs that have looked at my sites on sitemeter. There are quite a few sites that are different than usual this time.

Cherrypal, a green, linux based, inexpensive, cloud computing personal computer has a new website. The site is very interesting because it explains a whole new set of technologies for personal computing that are quite affordable. I find myself wondering about this thing more and more. It should be an interesting startup story.
http://cherrypal.blogspot.com/

I also got an invitation to an event called Women Working In Panels. It looks quite interesting. I am not sure that I will be able to attend. I think it seems to be for a very worthy cause.
http://barnardzines.livejournal.com/38608.html

Anyways, I am just getting up. I haven't had my morning coffee yet, so I am still a bit bleary, but I think today should be an excellent day.

I've had my coffee so I am feeling a bit better. I have started reading Fantasy of the 20th Century, An Illustrated History by Randy Broecker. It is a chronological history of fantasy books starting with references to Beowulf, the Eddas, and Gilgamesh. The book is profusely illustrated with covers of fantasy works on almost every page. Major fantasy artists like Hannes Bok, J. Allen St. John, Virgil Finlay, Jeff Jones, Emsh, Margaret Brundage, Jack Gaughan, Michael Whelan, Gray Morrow, Frank Frazetta, Roy G. Krenkel, and many others are represented with their cover work for pulps, paperbacks, and hardcover books.
It is a really beautiful book to look at. Hopefully, I will find a few books to read which I haven't seen before in fantasy as well. Fantasy of the 20th Century lists a number of older authors which are fairly hard to find now, Otis Adelbert Kline, Lin Carter, and Karl Edward Wagner all staples of swords and sorcery are no longer around sadly. It also has a rather interesting section on fantasy films. A few films which I hadn't seen were listed. One of them is Fire and Ice produced by Ralph Bakshi with art by Frank Frazetta. This film is kind of a cult classic. I requested it because I had never seen it. It also listed several of Ray Harryhausen's other films. I requested The 7th Voyage of Sindbad and Earth Vs. The Flying Saucers by Ray Harryhausen.
Posted by Book Calendar at 3:48 AM

I'm trying to get in touch with you about my book cover. Can you email me? This is in regards to the Sonshine Girls book cover. rene71@gmail.com

Thanks for visiting and commenting at cherrypal.blogspot.com !
I wanted to return the favor and say thank you for filling me in on your reading - and for the thorough reviews.